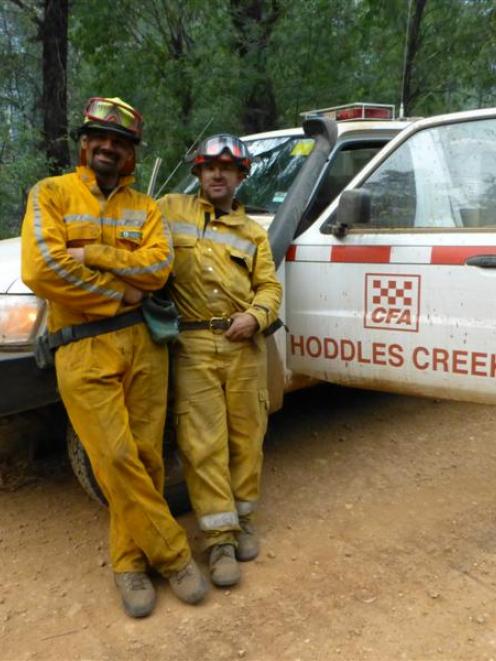 Patrick Eschenmoser (left), of Wanaka, and Jamie Cowan, of Queenstown, take a break in Hotham, Australia, while fighting the Victoria bushfires last week. Photo supplied.
Otago firefighters have returned home with a sense of achievement after 21 days fighting Victorian bushfires.

Five Department of Conservation firefighters were part of the 44-strong group of New Zealand firefighters sent to Hotham, Victoria, last month to aid the Australian National Fire Authority with bushfires started by lightning in late January.

Mr Cowan, Queenstown's rural fire chief, said the job was ''full on'', but he and the others felt a sense of reward helping out Australian neighbours.

''We pretty much did everything you could imagine. You name it we did it.''

After what he said was an exhausting trip, Mr Cowan has returned to what feels like a quieter life and easier work in Queenstown. 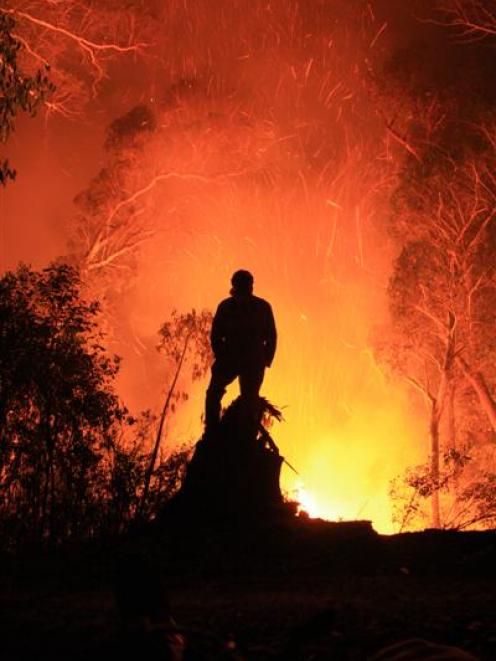 Hotham, Australia, where 44 New Zealand firefighters were sent last month. They returned home at the weekend after spending 21 days fighting the Victoria bushfires. Photo by Jamie Cowan.
After being welcomed by the Victorian premier on arrival, the New Zealand firefighters were sent straight to work for 16-hour days in seven-day shifts in 33degC temperatures.

''We were going through seven litres of water a day each.

''It was an eye-opener for some of the guys who haven't been in this situation. It was for those of us who have been, as well.''

Four firefighters have died this summer fighting Australia's bushfires, two of them the day before the 44 New Zealanders were deployed.

''It is a fairly dangerous occupation.''

The New Zealanders felt a definite sense of achievement upon leaving, as the fires had been almost fully extinguished due to the hard work and three days of rain that fell near the end of their placement.

New Zealand's National Rural Fire Authority has sent a further 22 firefighters across the Tasman to ensure the fires are contained.

The deployment last month was the second largest to Victoria after 109 New Zealand firefighters went in 2009. Mr Cowan said the fires had covered 37,000ha of land at a cost of around $1 million a day.

The fires have now been burning for more than 38 days.

''It's mixed emotion. It's great to be back with our families and they are obviously happy to have us back here safe, but we are proud of what we have achieved over there.''

He said New Zealand's own fire situation was on ''tenterhooks'' as the North Island droughts threatened and Central Otago has not received rain for the past three weeks.

''I'm playing catch-up now. We have come back to a very dry Queenstown.''

March was late entering a prohibited fire season, but if rain did not come soon, Mr Cowan said the ban was likely.

Fire permits were no longer being issued in the region.