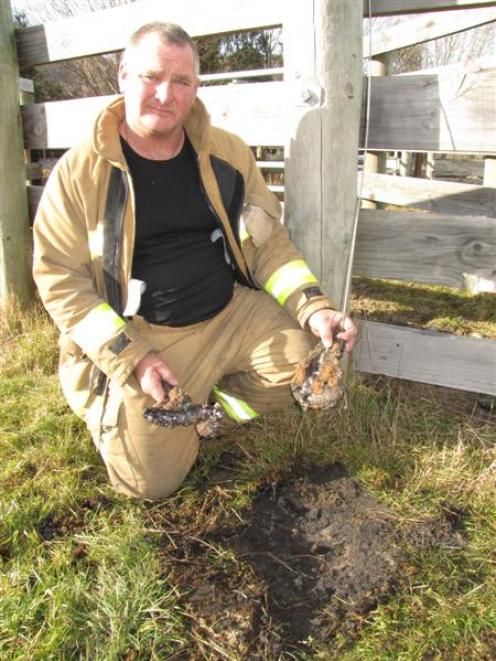 Arrowtown Fire Chief Garry Hall holds two pieces of earth, which were turned into glass when an overhead power cable fell on to a cattle yard, near Arrowtown, and caused a power outage yesterday afternoon. The cable is to the right of Mr Hall and the smouldering crater is where the cable fell and caused a minor fire. Photo by James Beech.
Delta believes a private digger operator is responsible for knocking out an overhead powerline, on McDonnell Rd, Arrowtown, sparking a small grass fire and cutting power to more than 300 homes and businesses for almost three hours yesterday.

Arrowtown firefighters extinguished the flames, which ignited when an 11,000v cable fell on to metal gates of a cattle yard, on Monk Farm, and shorted out on the timber posts, about 11.10am.

Power was cut to homes and businesses in McDonnell Rd, Arrow Junction, Crown Terrace and the Gibbston Valley.

Lumps of earth were turned into glass by the high-voltage electrical current.

Fire Chief Garry Hall said timber and grass were on fire, but the incident was not a major one.

Firefighters extinguished the fire after confirmation from Delta the electricity supply was cut off.

"I pulled in to see what was going on.

"I could hear a noise; [it sounded like] electricity and I called Delta and the fire brigade."

Delta system-control manager Graeme Johnson, of Cromwell, said it was not known who was responsible for knocking out the line, but staff suspected it was a private contractor.

The person was liable for the estimated $1500 repair, "which is nothing compared to the inconvenience for customers", he said.

It was "a lucky escape" for the digger operator and nearby residents.