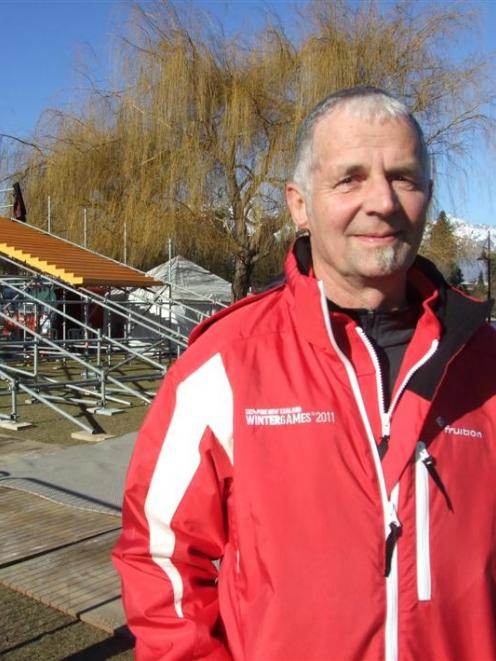 The event marks the start of the second Winter Games, a 16-day extravaganza of top-level international winter sports competition and downtown festivities.

After its inaugural success in 2009, the two-yearly event returns in conjunction with the annual Parklife Invitational, where freestyle skiers and snowboarders compete on custom-made, snow-covered stairs in downtown Queenstown.

Preliminary competition for the rail jam begins at 5.15pm, while a VIP opening function on the TSS Earnslaw will be attended by the Minister for Economic Development, David Carter.

The official opening will then take place at 7.15pm, with the flags of all of the competing countries raised and the New Zealand flag honours falling to skier Sarah Jarvis.

The New Zealand anthem will be sung before Mr Carter declares the Winter Games open.

That will signal the return of the freestyle skiers and boarders who, after a half-hour exhibition, will compete in the finals of the rail jam until about 9.30pm.

Winter Games chief executive Arthur Klap expected a "huge crowd" of between 3000 and 5000 people for the opening party.

Mr Klap was confident about the launch.

"We have an unbelievable team of volunteers who have been working for five or six weeks so it's looking very good at the moment," he said.

The two events are being integrated as part of this year's Downtown Sessions programme, which is aimed to create a festival atmosphere around the games.

Tonight's celebrations will continue after the opening, with a party at Subculture featuring Antiform DJs at 9pm, followed by tomorrow's inaugural AJ Hackett Bungy Adventure Expo at the Queenstown Memorial Hall.

The "interactive" expo opens at 10am, and from 6pm will feature the Volkl Vintage Ski Suit Fashion Show.

Australian duo Yacht Club DJs will play at Revolver for the after-party until 4am.

Finally, the weekend rounds off with the return of the QRC Winedown, a consumer wine-tasting with producers from New Zealand and overseas on Sunday, August 14, from 1pm to 7pm.

10 must dos at the Winter Games

With so much going on during the Winter Games, Olivia Caldwell has come up with a top 10 "must dos" to keep in the pocket of your puffer jacket.

August 19-28 You might think I am having a laugh here but, seriously, these athletes are as good as your poker professionals at giving absolutely nothing away until they have taken the honours. The week's dark horse is a must-see.

August 25-28 One hundred and fifty dogs will be harnessed up for the 20th anniversary of this epic event so take your mates, partner, children or dog and enjoy a mulled wine on the sidelines.

Downtown Queenstown, tonight This is the official party opening of the games so it ought to be one to get yourself along to to witness the freestylers compete on a specially built snow stage.

Arrowtown and Wanaka August 13-16The music of the Beatles, Pink Floyd, David Bowie and several other 1960s British artists will provide just the relaxing feel-good evening you will need to prepare for the sporting frenzy ahead.

Between Methven and Queenstown, August 19-21Screenings from the NZ Mountain Film Festival prove you do not have to climb one of the surrounding mountains to get your Queenstown adrenalin fix.

Frankton, August 27If you are a sucker for shopping and sweets then this is your week highlight. Yes, it is a tame event that does not really fit in with the rest of the week's shenanigans, but bargains are many and the food will be amazing.

Queenstown August 27For the first time, Queenstown gets its own bitter-sweet taste of all the lager, ales and ciders it can stomach, and you can join in. Organisers are predicting a 500-strong crowd to enjoy the six beer stalls, six food stalls and live music at the Queenstown Memorial Hall.

Queenstown, Wanaka, and Dunedin, August 18, 19, 21If the curling did not satisfy you, these jokers will. Led by local boy Brendhan Lovegrove the stand-up acts include the master mimic Simon McKinney, and the Australian combo of Justin Hamilton and Greg Fleet.

Wanaka August 28After 16 days of action the only way to finish the week off is to party to a blend of Kiwi musicians, including headliners the Black Seeds.

Dunedin August 19Gisborne's traditional New Year's Eve concert is returning to where it all began and will feature some of New Zealand's finest in the Black Seeds, P-Money, I am Giant, and locals Knives at Noon.

An easy winner for the top spot this year and a guaranteed packed-out stadium.