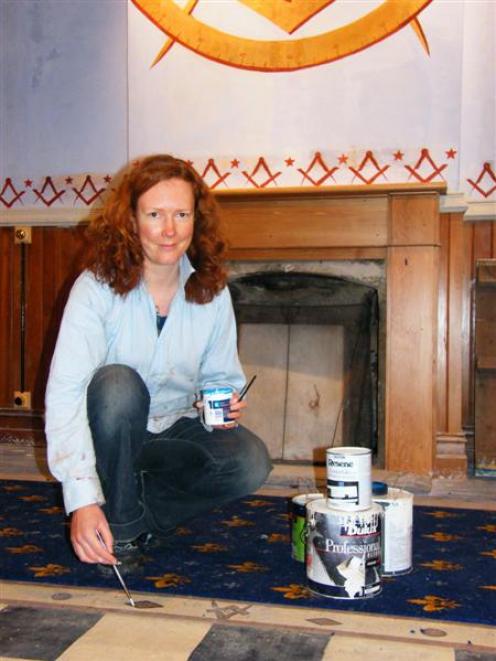 Conservator Eimear O'Connell applies her art history and building conservation expertise on the newly rediscovered wall paintings in the Arrowtown Masonic Lodge. Photo by James Beech.
Rare wall paintings rediscovered in the Arrowtown Masonic Lodge after 60 years have been restored in time for a public viewing tomorrow as part of the Autumn Festival.

A dado-level stencilled frieze that repeats square-and-compass motifs between single stars in dark reddish brown paint with gold highlights was uncovered for the first time in decades.

At cornice level, hand-painted swags of drapery were found, with additional Masonic motifs meeting at each corner of the room in large painted tassels.

A large gold painted square-and-compass insignia was uncovered on the chimney breast on the south wall and a silver moon and stars to the east wall were also found.

A black and white tessellated pavement, painted on to a floor canvas with painted symbolic objects, was uncovered in the centre of the room a few weeks later.

"The paintings were considerably damaged in places by the crude cutting-in of timber battens along the top and bottom of the wall and the historic limewash basecoat had suffered from its long enclosure," Ms Gillies said.

Historically faithful replastering and retouching began, with the only intact wall in the room used as a guide.

"I thought it was extraordinary and such amazing timing that we uncovered the wall paintings in the same month Eimear [O'Connell] started working for me, having arrived from Ireland with expertise and experience in restoring wall paintings in Syria and Italy.

"Those kind of skills are extremely rare in New Zealand, so we are very lucky to have Eimear on the spot at the right moment."

"There's not a lot of this decorative scheme remaining in New Zealand, so it is significant," she said.

"From a social history point of view, it was the churches and the lodges that provided a form of community support for early settlers and all this work would have been done by the lodge workers themselves."

The building officially designated as "Lodge Arrow Kilwinning No. 86" was completed and consecrated on January 23, 1888.