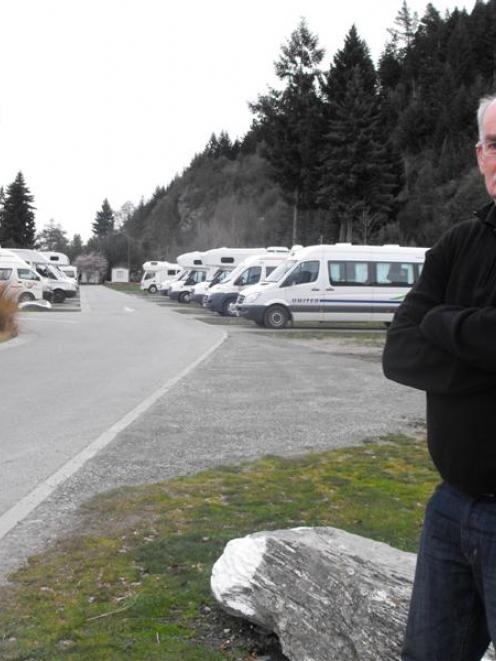 Queenstown Lakes District Council holiday park manager Greg Hartshorne says the 2012 winter has been the quietest he has experienced in 20 years. Photo by Olivia Caldwell.
Despite occupancy at all four Queenstown Lakes District Council holiday parks being down at least 20% this past winter, park manager Greg Hartshorne will present a report to council tomorrow saying they are operating "in a profitable manner".

Last Friday, the Otago Daily Times reported that while guest nights in Queenstown were up 7.1% in July compared to the year before, holiday park numbers were quite the opposite.

Mr Hartshorne said it was "the worst July" he had ever seen.

Echoing the calls of Tourism New Zealand chief executive Kevin Bowler to convince more Asian tourists to experience holiday parks rather than hotels, Mr Hartshorne said in the report the importance of this growing industry had been noted and options investigated.

"With tourism figures showing that the Asian market, especially both China and Indonesia, remains strong, we are exploring the opportunity to advertise online in these countries.

"This will not be an overnight fix, as those travelling from these countries are still a wee way from managing their own travel, but the time will come when they will be a major player [in the independent travel market]."

Speaking at the Holiday Parks Association of New Zealand conference and trade exhibition in Queenstown in June, Mr Bowler said the Chinese saw holiday parks as dangerous, but New Zealand offered "a product that is very different to that in China".

In the report, Mr Hartshorne admitted the market had been extremely difficult in recent times, but the importance of the product the parks offered "is reflected in the income these parks generate for both the council and the community".

Costs of maintaining the Arrowtown Born of Gold Holiday Park had increased in the past financial year due to the rising cost of wages, energy, rubbish disposal and unplanned maintenance such as burst pipes.

"Taking this into account, this park is the only one whose income not only increased against last year, but came in ahead of budget."

Wanaka Lakeview Holiday Park failed to meet budget but did increase its income on the previous year, because of an upgrade to the basic cabins, which were moved from Queenstown at a cost.

Income decreased at Glendhu Bay Lakeside Holiday Park and was down 10% on budget. This was attributed to the loss of several sites when the water and sewerage systems were upgraded.

At the Queenstown Lakeview Holiday Park, occupation of sites was up and of rooms was down.

"Within the context of the current economic climate, this is actually a positive result.

Expenditure has come in well below budget, thus helping to reduce the shortfall at the bottom line."

In summary, Mr Hartshorne said the parks had traded strongly during "tough times" and had produced "a result that belies the difficulties of that last financial year".