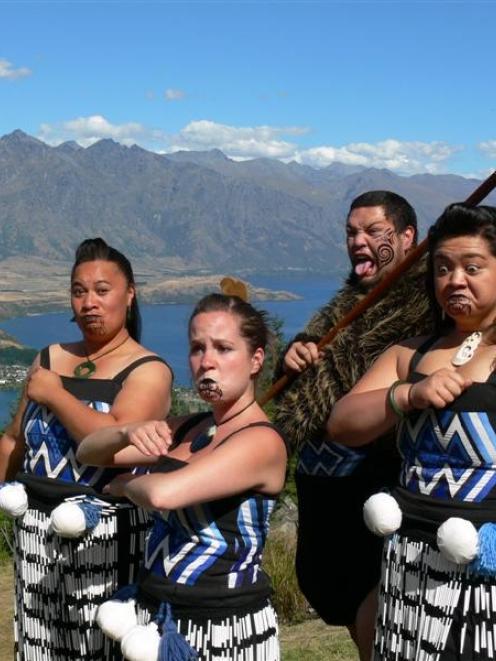 Members of Queenstown's Kiwi Haka Maori cultural performance group (from left) Liz Davis, Emere Leitch-Munro, Neil Sarich and Sammy-Jo Matete are looking forward to meeting friends and whanau, and celebrating their culture. Photo by Felicity Wolfe.
Queenstown is now considered one of the world's best resort destinations and almost every month receives accolades for its natural beauty and pure atmosphere.

But while most of people from around the world see it as a youthful town, Lake Wakatipu and its surrounding area have always been recognised as a place with a greater than usual spiritual meaning for the first people to discover it - Maori.

In Queenstown today members of Kiwi Haka, the cultural performance group which performs most days at the Skyline complex on Bob's Peak, will take time out to share the day with friends and whanau and celebrate the day which marks the bicultural agreement between Maori and Pakeha to share the land.

The Wakatipu basin or Whakatipu-wai-maori was first discovered on the earliest expedition into the Southern Lakes region by the tupuna Rakaihautu and his party from the Uruao waka.

Rakaihautu is traditionally credited with creating the great waterways of the interior of the the South Island with his ko (spade).

Hapu from around Otago and Southland would return to Wakatipu each summer - the area held plentiful food and was an accessway to pounamu in the remote valleys west of Glenorchy.

The Ngati Mamoe chief Tu Wiri Roa had a daughter, Haki Te Kura, remembered for swimming 3km across the lake from Tahuna.

The area was also considered an important source of hukawai [pure meltwater].

Ngai Tahu's Treaty of Waitangi Deed of Settlement says: "The mauri of Whakatipu-wai-maori represents the essence that binds the physical and spiritual elements of all things together, generating and upholding all life.

All elements of the natural environment possess a life force and all forms of life are related.

Mauri is a critical element of the spiritual relationship of Ngai Tahu Whanui with the lake."

•Source: Ngai Tahu's Deed of Settlement of its Treaty of Waitangi claim.