The very model of a sporting woman 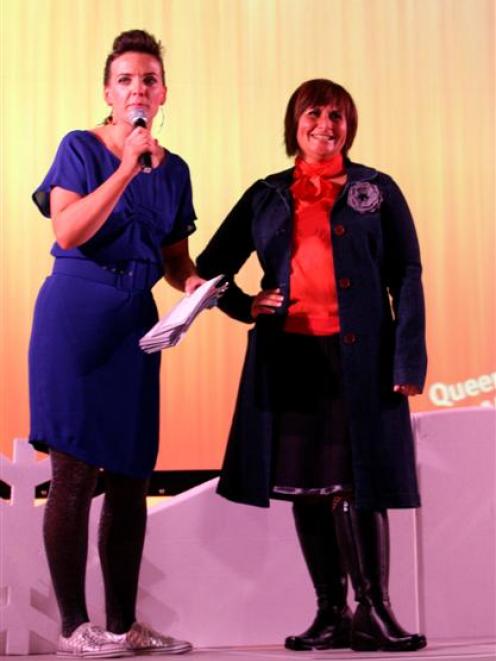 Chris Hall (right), of Queenstown, is interviewed by compere Emma Lange during the fashion parade held to celebrate the achievements of 12 local women who successfully participated in the 2009 Lindauer Ladies Fitness and Fashion Challenge, part of the American Express Queenstown Winter Festival.
In the past few months, Queenstown mother of two Chris Hall has run a half marathon and completed a duathlon.

She will next month complete the Tour de Wakatipu and then head to Blenheim in May for another half marathon.

After completing a boot camp in April last year, she said she was quick to apply for the three-month gym-based programme.

"I just needed to step out of my comfort zone. I had to change.

"I just started not going out socially because I was embarrassed."

If she needed any more inspiration, it came from her daughters, aged 11 and 12, she said.

"I did it for my kids. I thought if they could go out there and swim and dance and run, then I could do it too."

While the idea of going to a gym was initially daunting, it was not long before she overcame her fears.

"I was just not comfortable [to start with], but the staff were brilliant.

"You realise everyone else is there for the same thing."

"It's given me all the tools that I need to keep doing fitness and eating properly.

"It just made me very aware and I've just carried it on."

Along with her hard-earned weight loss, Mrs Hall did something else she never thought she would: be a model in a fashion parade.

"I still don't quite believe I've done that. That was out of my comfort zone, but it was so much fun."

Mrs Hall said another of the major benefits was meeting other women on the challenge, some of whom she has formed firm friendships with and continues to meet at the gym once a week.

"We're carrying it on: there are about four of us from the challenge who still get together.

"That's the social side of it."

She also had some advice for any woman contemplating applying for the 2010 event.

"Definitely, do it. Enjoy it ... and remember to laugh along the way.

"It's brilliant and I'm so pleased I did it."

• Applications for the 2010 American Express Queenstown Winter Festival Lindauer Fitness and Fashion Challenge close at noon tomorrow. To apply, state in 100 words or fewer why you should be chosen to participate and either email your entry to info@winterfestival.co.nz or drop it in to the Winter Festival offices, Level 1, Chester Suites, corner Camp and Shotover Sts.

The event will cost $575 for Alpine Health and Fitness members or $750 for non-members.