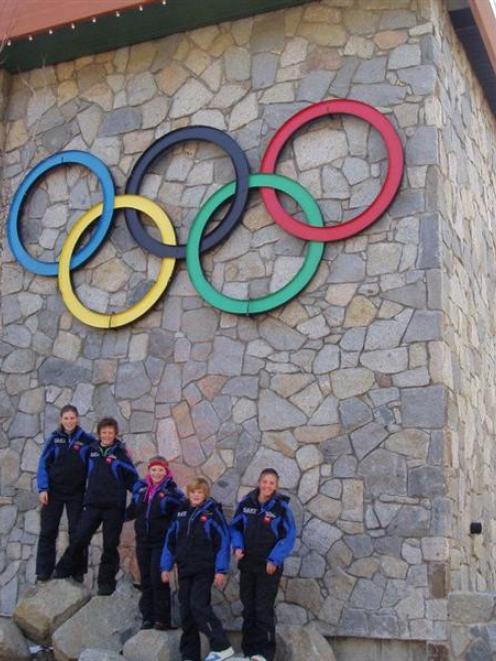 Standing at the bottom of the Funitel lift at Squaw Valley, Lake Tahoe, are Queenstown Alpine Ski Team members Mackenzie Muir (14), of Auckland, Sam Shaw (13) and Tully Robinson (12), both of Queenstown, Jackson Rich (13), of Porirua, and Cameron-Leigh Murphy (12), of Queenstown. Photo supplied.
New Zealand Olympian Tim Cafe has just led a group of skiers aged 12-14 through their first overseas competition experience, and hopes to organise a "bigger and better" camp next year.

Five young members of the Queenstown Alpine Ski Team (QAST) members spent a month training and competing from a base in Alpine Meadows, Lake Tahoe, California. They returned to New Zealand last month.

"When we arrived, Tahoe was in the middle of a season which mirrored June for Queenstown last year - warm, very little snow," Cafe said.

However, three days later, a "massive Pacific storm rolled in", dropping 1.2m of snow, and the young people were soon skiing new resorts and meeting their US counterparts.

There they were faced with "fields of a much higher calibre" than in New Zealand. Here, most age groups had 10-20 competitors. In the US, there were often more than 80.

"All things considered, I think we had some very impressive results," Cafe said.

Highlights were Jackson coming second in the Grand Prix at Alpine Meadows, and Tully coming fifth in the Dual Slalom and Cameron-Leigh coming sixth in the Giant Slalom, both at Squaw Valley, Cafe said.

"The performances are a nice way to be measured on a scale which shows the kids what ski racing internationally is like," he said.

"There were some very impressive results, but rather than being something to celebrate, I see these [as] very important stepping stones to becoming an internationally successful ski racer." He thought the young people would produce some impressive results in the coming season.

They would "now feel comfortable and confident in New Zealand", he said.

Cafe was in charge of all on-snow activities, planning camp logistics, tuning the skis and managing the equipment, off-snow physical training, goal-setting and mental-skills training.

"Sounds a handful, and it was, but I loved every minute of it," he said.

He could not have done it without "camp mum" Maria Shaw, he said.

He would do it again "in a heartbeat".

"I have applied for a job coaching this age group ... this coming winter and hope to organise another camp next year, making it bigger and better," he said.