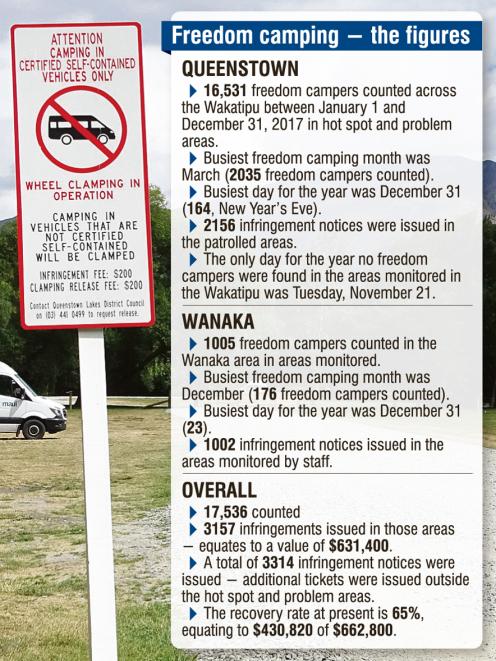 Information supplied to the Otago Daily Times shows across the district 17,536 freedom campers were counted during the calendar year at a variety of freedom camping sites.

Not surprisingly, the busiest freedom camping day of the year in both Queenstown and Wanaka was New Year's Eve, when 164 were counted in the Wakatipu and 23 in Wanaka.

In Wanaka, the majority of those campers (12) were parked on lakefront reserves, while in Queenstown 133 were parked at the Lake Hayes Recreation Reserve, where the council put in place new measures in December to try to separate freedom campers from recreational users between 10pm and 5.30am.

Of the infringement notices, 3157 were issued in areas being patrolled by contractors to people who were either camping in areas they shouldn't be, were not in certified self-contained vehicles, or were breaching the two-night maximum stay.

represented 20% non-compliance when averaged over the year, Mr Webster said.

``If we compare that to somewhere like the Coromandel, they're 3% [non-compliance],'' he said.

The council was working to understand why non-compliance in the Queenstown Lakes area was so much higher.

``Whether or not it's because of the signage, or the information that they [the Thames-Coromandel District Council] put out there - they've got one road in one road out ... In talking with colleagues in the different locations, trying to figure it out, it's the million-dollar question at the moment, to be honest.''

``We had the [Rugby] World Cup and everyone was trying to do the right thing ... Since then, social media kicks in and people go `leave the country - what are they going to do?'''

Mr Webster said the council would be reviewing its freedom camping bylaw this year to see what other measures could be put in place to better manage freedom campers in the long term and increase recovery rates.

Council staff were also brainstorming other solutions to the more pressing problems - primarily involving ``freedom defecators'' - that could be put in place ``immediately''.

Last week the ODT reported council staff and members of the public were being forced to pick up human waste being left by freedom campers who were choosing to do their business in trees and bushes, rather than on-board or at public facilities.

Mr Webster said collaborative, outside-the-square thinking was being used at the council to try to find solutions to the problems as soon as possible.

``I'm looking at things in a slightly different way ... to try and achieve what we want to achieve - basically, to stop these people doing what they're doing, because it's not OK.''

Take the freedom campers' keys off them until the fine is paid...100% compliance ensured !!
NZ Fabrications Dunedin has lightweight container structures that could be purpose built as transportable self contained toilet blocks. SewageTank trucks could empty them on a cyclic basis and that would save Kiwis having to clean up after careless airheads..The fines could pay for the service and our rest ares would be scenic once again...not septic...Maybe the new Govt could do what the old one couldn't do...use some tourism GST to fund clean n green projects?!