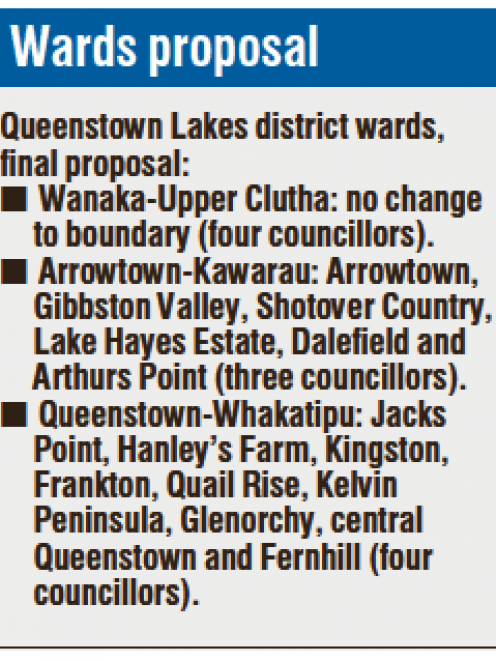 More than 140 years of stand-alone Arrowtown representation is set to be consigned to history.

However, a peaceful uprising by Wanaka and Upper Clutha residents means they are likely to keep their community board.

Despite an independent advisory group’s recommendation to get rid of the Wanaka community board, Queenstown Lakes district councillors voted unanimously to keep it yesterday, as they adopted their final representation review proposal.

However, another key advisory group recommendation, to merge Arrowtown into an expanded ward, has won support, despite the council deciding in July to seek feedback on keeping it as one of four wards.

That decision prompted the only dissenting voices at the meeting, from Arrowtown councillor Heath Copland and Cr Craig Ferguson, who both voted against the proposed ward structure.

The township is now set to become part of an Arrowtown-Kawarau ward represented by three councillors.

The council’s final proposal is the outcome of consultation and two public hearings last month.

A final tweak came from Cr Niamh Shaw, who won unanimous support for her amendment to have three councillors appointed to the Wanaka community board instead of one.

Several councillors commented on the exceptional quality of submissions, and how they had prompted them to change their views on the Wanaka community board and Arrowtown issues.

About 75% of the 303 submitters were from the Wanaka-Upper Clutha area.

Two-thirds of all submitters wanted the community board retained.

Cr Niki Gladding said she supported Cr Shaw’s amendment, but was worried "the mana of the non-councillor members of the board can be undermined when you’ve got three strong councillors sitting on it".

She hoped those councillors would recognise the need to enable the other members of the board to fulfil their role.

Cr Glyn Lewers said the Upper Clutha community had been "proud and staunch" in wanting to keep their community board, but that was not enough.

"I just hope when it comes to election time, some of those submitters stand up and try to get on that board."

On Arrowtown, Cr Val Miller said the township’s representation would be strengthened by the new ward structure because the onus would no longer fall on one person.

"I see this now as a burden shared by three people."

The deadline for appealing or objecting to the council’s final proposal is October 22.

Should any appeals or objections be lodged, the Electoral Commission will make the final decision.