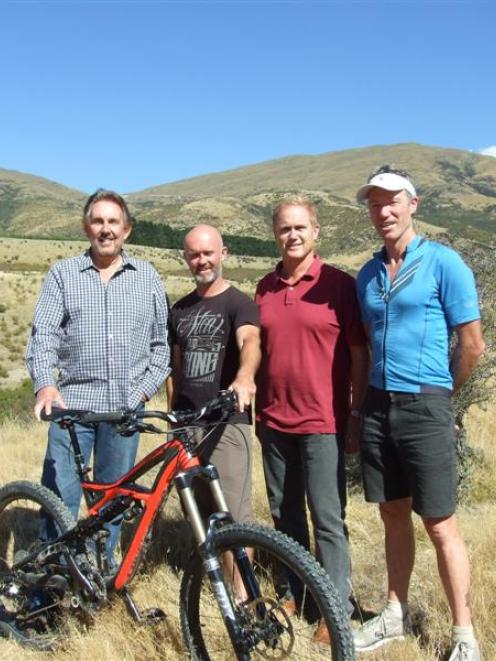 Gibbston Valley Winery owner Phil Griffith, trail designer and developer Ben Rafferty, Gibbston Valley Winery chief executive Greg Hunt and Around the Basin director John Knight stand at the hub of the developing Rabbit Ridge bike resort at Gibbston yesterday. Photo by Olivia Caldwell.
We have all heard of making a mountain out a molehill, but what about making a bike resort out of a rabbit warren?

The idea sprang from a conversation in a car park between Gibbston Valley Winery chief executive Greg Hunt and John Knight, a director of Wakatipu bike tour company Around the Basin, in January.

Three months later, the 400ha Rabbit Ridge Bike Resort, on rabbit-prone land at Gibbston, is only a month away from its official opening.

Mr Hunt said the initiative had developed quickly, but this was a reaction to the fast-growing popularity of Wakatipu's mountain biking scene.

''The uptake has been great here. We have needed to speed this up. It has been the natural progression in the mountain bike market.''

The two companies, Gibbston Valley Winery and Around the Basin, had combined in a separate entity to create the bike resort, which had an estimated cost of $100,000 and a further ''significant investment'' over time, Mr Hunt said.

However, Mr Knight said they had no plans to be direct competitors and would instead complement the Queenstown Bike Park by broadening the Wakatipu mountain bike product.

''It is for those who want a bit of variety, a grade one, easy-style track that most riders can enjoy.''

When Mr Knight and business partner Steve Norton first arrived at the privately owned land to view the site, they were blown away by what Mr Knight said was ''stunning world-class'' terrain for a mountain biking paradise.

The winery has been granted consent to build accommodation on a site close to the bike park, a golf course over the road and a hotel further towards the winery's restaurant. Mr Hunt said the plans would go ahead and the hotel's construction would begin next year.

Winery chairman and land owner Phil Griffith said the bike resort's ground work would be laid by April, but this was ''just touching the surface'' of what was to come.

''What started with a casual chat has developed and we have a long-term goal of Gibbston Valley Winery being more than just a winery, that is, to broaden our brand.''

Mr Griffith has a vision that Gibbston will be the third part of the Queenstown-Arrowtown visiting combination for tourists, and said this was already starting to develop, through the opening of the Queenstown Trail.

The trail's designer and developer, mountain biker Ben Rafferty, is well into building 30km of single tracks and he said they would have enough variety for learners and advanced riders.

Bikers can choose to cycle to the top of the trails or use a provided shuttle at a cost, and there are plans for heli-biking options.

If the proposed trail from the top of Ben Cruachan was built, it would be the longest single-track run in the southern hemisphere, he said.