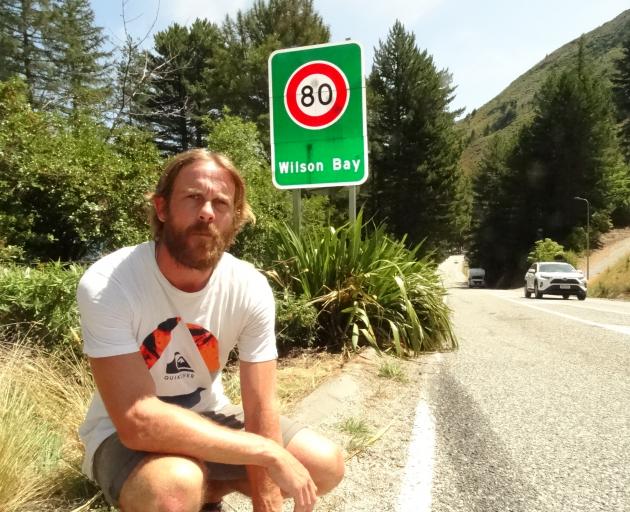 Nicholas Holmes at the scene of Tuesday’s crash.PHOTO: GUY WILLIAMS
First there was a massive crash, then the sound of metal grinding on road.

Arrowtown man Nicholas Holmes was about to sit on the beach at Wilson Bay on Tuesday, expecting some peace and sunshine, when his day was turned upside down.

"As soon as I heard it, I knew something was wrong.

"After that I just heard screaming."

He ran up the bank to Glenorchy-Queenstown Rd to see an overturned bus and trailer about 100m up the hill.

"It was just carnage, walking wounded ... I was one of the first people at the scene."

All 23 occupants — from small children to late middle-aged — had clambered out through the bus’ broken rear window in various states of "shock and confusion".

A woman he thought was a nurse, from one the first vehicles to stop, was tending to a girl and a woman with "graphic" injuries to their arms.

She asked him for his watch.

"I’m pretty sure that was to stem the bleeding of a little girl who lost her limbs."

He went to help a group of about 15 passengers on one side of the bus with less serious injuries.

"I didn’t have any first-aid equipment, but I had a bottle of water so I was just giving them that, and reassuring them that emergency services were on the way.

"I was trying to get them to sit down as well, but I think they were just in too much shock."

He had been at a vehicle accident scene before, "but nothing as traumatic as that".

"I think instinct kicked in. I didn’t think about it — I just went to help, as most people would do.

"Everyone just did what they could at the time with what they had."

He and others were unable to call 111 because the site was in a black spot for cellphone coverage.

"It made it a bit tricky — people were wandering around trying to call people.

"I think one of the Closeburn locals must’ve made the call."

He stayed at the scene for the seven or so minutes it took for the first emergency workers to arrive, at which point he was told to move back.

Mr Holmes, who leaves tomorrow on a six-month trip to South America, was visiting a friend in Closeburn at the time of the crash.

The pair spent much of the afternoon giving water to stranded motorists waiting for the road to reopen.

Two days later, he was still "processing" the experience.

"Yesterday there was a lot going through my mind, hoping that the people are going to be OK."

A 32-year-old man is expected to appear in the Queenstown District Court on Monday charged with careless driving causing injury.