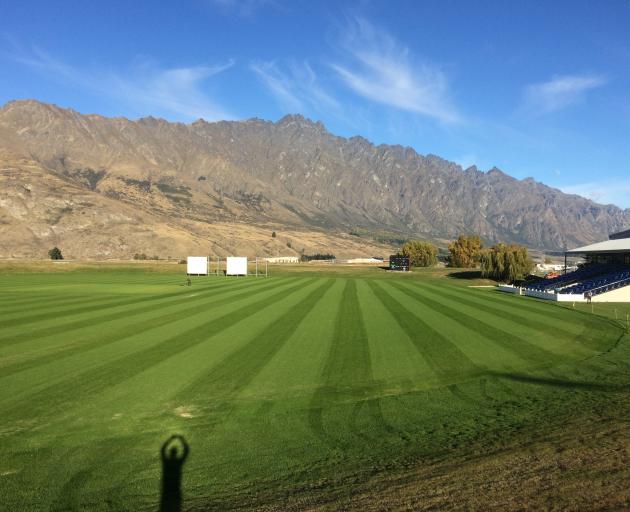 Queenstown Events Centre's Sir John Davies Oval. Photo: Supplied
Queenstown's scenic cricket oval has been snubbed by international cricket for six years, but it remains in the minds of many of the sport's greats.

Interviewed at last week's Wimbledon BookFest in London, he was asked which ground he would take to his desert island outside his native Essex.

He flirted with Newlands, in South Africa, but settled on Queenstown, which has the stunning Remarkables mountain range as a backdrop.

Twenty games will be played over eight venues, but Queenstown has again been left high and dry.

That has stumped local fans such as Russell Mawhinney and Robin Martin.

Former district councillor Mr Mawhinney has heard various excuses why Queenstown does not get a game - ''too expensive to get here, inadequate media facilities, no indoor training facility''.

''I've never heard ones like: the players don't like coming here, the pitch is no good, the outfield is no good''.

The Queenstown Lakes District Council paid $640,000 to bring the oval up to international standard, although community sport had been the main driver.

''It's hard to fault the grounds that do get international matches, but there has to be a better way to allocate these matches so fans throughout the whole country get a fair go.''

Mr Martin, a consultant, believed ''we should be doing everything possible to get all parties on our side - particularly NZ Cricket, to use some of its recently acquired funding from Spark - and institute a strong push to get international cricket back to Queenstown''.

Queenstown had the event management expertise and tourism and accommodation infrastructure to host games, he said, while television coverage would bring great economic benefits.

Local councillor and sports lover Craig Ferguson said it was sad Queenstown was missing out.

''But I think in terms of infrastructure, cost to the community to put it on and what NZ Cricket demands, I just don't think we're in that league at the moment.''