By Tracey Roxburgh
0 Comments
Lochana Kulasiri believes he had a brief blackout on January 11 last year while driving.

When he came to, a car was heading towards him.

His turned the steering wheel to try to avoid a collision.

"After that, just a flash. 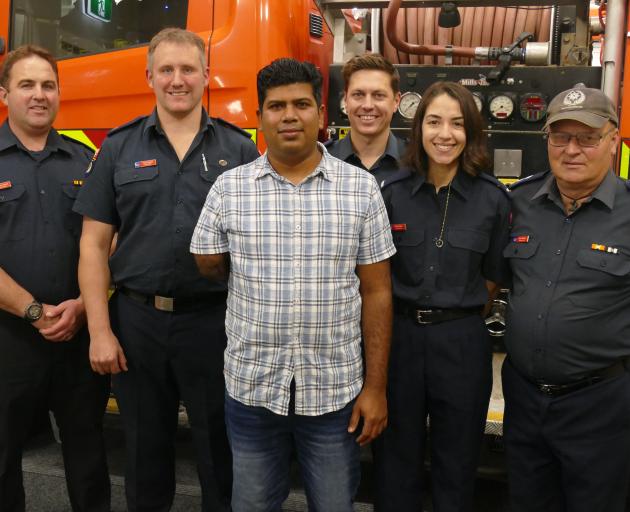 Lochana Kulasiri (centre), of Queenstown, pictured with some of the volunteer firefighters who helped save his life after a crash on Frankton Rd last January. Pictured (from left) are deputy rural fire officer, Bobby Lamont, and volunteer firefighters, Paul Halsted, Jesse Johnston, Pri Da Silva and David Christie.PHOTO: TRACEY ROXBURGH
"[A] big flash.

"In just a few moments everything happened and I was stuck underneath [the car]."

His was the first of three horrific crashes in Queenstown in 10 days — on January 15 Noelene Tait (84), of Queenstown, was killed on the same stretch of road, and on January 21 a bus crashed on the Queenstown-Glenorchy Rd, at Wilson Bay, injuring 23 Chinese tourists, including a 10-year-old girl, who lost both her arms, and another woman who lost one arm.

About 7.30am on January 11, Mr Kulasiri, at the time employed at the Ramada, was on his way home having worked a night shift, and was tired and unwell.

After the crash, his right arm was trapped under his car.

The father of two boys, now aged 6 and 8, remembered two bystanders running to his aid, keeping him calm until Sue Tait and her St John ambulance crew arrived at the scene and sedated him, while volunteer firefighters worked to free him. 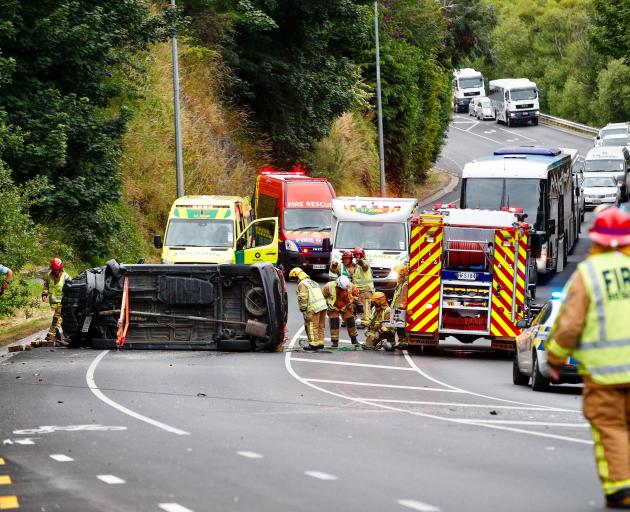 Emergency services work to free Lochana Kulasiri following an horrific crash on Frankton Rd last January. PHOTO: JAMES ALLAN PHOTOGRAPHY
"What I was told was I was stuck there for 45 minutes, they had to cut off the car and then pull me out."

The technical rescue employed hydraulic tools and airbags to lift the vehicle, while the emergency crews were relying on advice from St John as to when that could happen.

A rescue helicopter was dispatched from Dunedin — it was the first time a helicopter had landed on Frankton Rd.

Mr Kulasiri (34) was flown to Dunedin and placed in an induced coma before undergoing a series of operations on his right arm.

Due to an infection, doctors said he could keep his hand, which would have minimal function, and arm and potentially be on medication for the rest of his life, or undergo an amputation.

He chose the latter.

After a month in Dunedin Hospital he returned to Queenstown and started learning how to use his left arm, having been right-handed, and is working on getting a prosthetic.

And, having lost his job due to Covid, he began working Holiday Inn Express as the night assistant manager in November.

He was later charged with careless driving causing injury, but discharged without conviction in July last year.

At a special function hosted by Fire and Emergency NZ at the Queenstown Fire Station on Wednesday night to thank employers of Queenstown and Frankton volunteers, Mr Kulasiri thanked his rescuers, calling them "God’s angels on Earth".

"If it wasn’t for the hard work of you guys I don’t think that I would be standing here and talking to you all.

"I pray that you guys continue to serve the community and keep saving more lives like mine."

Mr Lamont said it was "very humbling" to see how well Mr Kulasiri was doing.

"He came and saw us late last year when he was a lot better and he brought his family and his mother-in-law.

"It was quite emotional.

"We don’t really get to see the other sides of the good work the volunteers do."