Let the recovery begin in earnest.

After 330 days, the first transtasman flight direct to Queenstown since the bubble with Australia popped was 90 minutes late in landing yesterday.

That did not dampen the spirits of the 172 on board flight QF121— who contended with a storm delaying their departure from Sydney — nor those waiting in the terminal to greet loved ones.

While a more sedate celebration than last April’s inaugural Australian flight, the first since Covid caused New Zealand to shut its borders, there was still a party atmosphere inside the airport terminal.

Among the passengers yesterday was Helen Turnbull, of Sydney, reuniting with her sister, Fiona Turnbull, of Dunedin, for the first time in a year, and Angela and Mark Miller, who will spend a week in the resort. 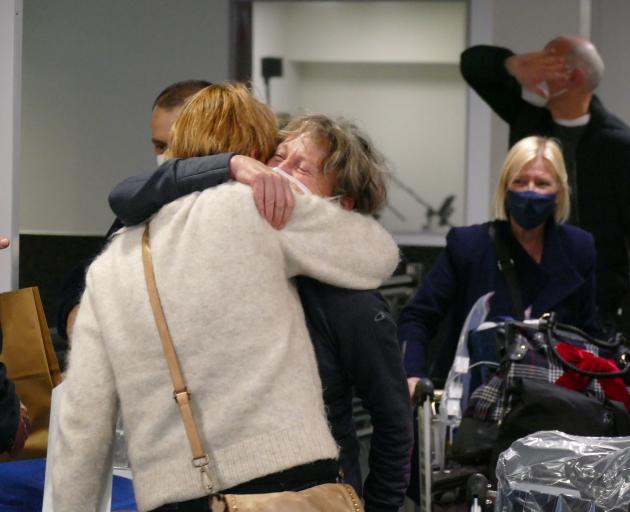 Helen Turnbull, of Sydney, hugs her sister, Fiona Turnbull, of Dunedin, at Queenstown Airport yesterday a year after they last saw each other. PHOTO: TRACEY ROXBURGH
When asked what their plan was, Mr Miller was quick to respond: "Spend a lot of money".

For Mr Sowry, it was the first time he had seen a scheduled international service land at the airport since he started in the role last September.

"I was beginning to wonder if it was ever going to happen, so coming into the airport this morning and seeing that Qantas arrival up on the flight screen was very exciting."

He expected the number of Australian visitors to be about 25% down on what they were pre-Covid this winter but was heartened by Qantas’ schedule.

It will operate up to 20 weekly services from Australia to Queenstown, with capacity expected to hit 110% of pre-Covid levels by July.

An airline spokesman said Queenstown was making a "particularly strong comeback" as a destination for Australians, and ramping up flights in time for the ski season would be a "shot in the arm for tourism, off the back of a tough few years for local operators".

Mr Nash said yesterday signalled "the beginning of the end".

"This is what we’ve been waiting for, for so long."

He acknowledged, however, there was a worker shortage crisis affecting the Queenstown Lakes district, and many other regions across the country,

but said Tourism New Zealand and Immigration New Zealand were working together to attract working holiday-makers to New Zealand.

Mr Boult said he was "over the moon" to see Australian visitors back in Queenstown yesterday, given the "really tough" 11 months since the bubble popped.

However, he remained "very concerned" about the worker shortage.

"New Zealand as a whole has a major labour shortage — here, it’s the worst in the country."

Mr Boult said Immigration Minister Kris Faafoi had undertaken to have "someone from his office call me a couple of weeks ago" to discuss the issues.

"I await that call."