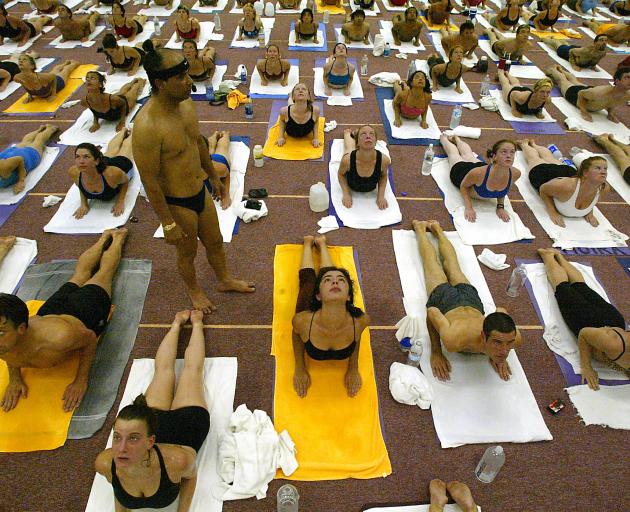 Yoga guru Bikram Choudhury (standing) at the Bikram Yoga College of India in Los Angeles. Photo: Getty Images
A disgraced yoga guru was "creepy" and does not deserve to be associated with the practice, a Queenstown teacher who trained with him says.

Mr Choudhury is the subject of a new Netflix documentary which details allegations of rape and sexual assault against him. He denies those allegations.

Ms Ferguson said she personally had a good experience during the training.

But her impression of the yoga guru was much different.

"I didn’t like him, from the moment he walked into the room.

"He just seemed very flashy and vain and creepy."

She was not aware of sexual allegations against him at the time.

She learned of the allegations against Mr Choudhury a year later. She felt the Netflix documentary was helpful

"He’s lost his right to be part of the industry now, so I’m going to be taking his name off my brand.

"I want to be part of the movement forward of the industry, not clinging on to the past."

Her comments followed an open letter from Hot Yoga Dunedin founder Donna Wikio, who had also removed the name Bikram from her studio.

She apologised for sending trainees to learn from Mr Choudhury, and said at least one was "propositioned" by him.

Mr Choudhury, who is being represented by New Zealand-born, UK-based public relations professional Richard Hillgrove, has not responded to a request for comment from the Otago Daily Times. In a statement to media about the Netflix documentary, Mr Hillgrove said Mr Choudhury "totally refutes all the allegations of sexual misconduct and harassment presented in the film and is deeply upset by the continued character assassination".

"Bikram believes that the concerted effort by money-motivated lawyers to proactively send letters to a database of all his clients, offering people free legal representation and the promise of $1million insurance policy payouts, is the primary motivation for this reputational catastrophe."