Fans do talking in resort for Lions 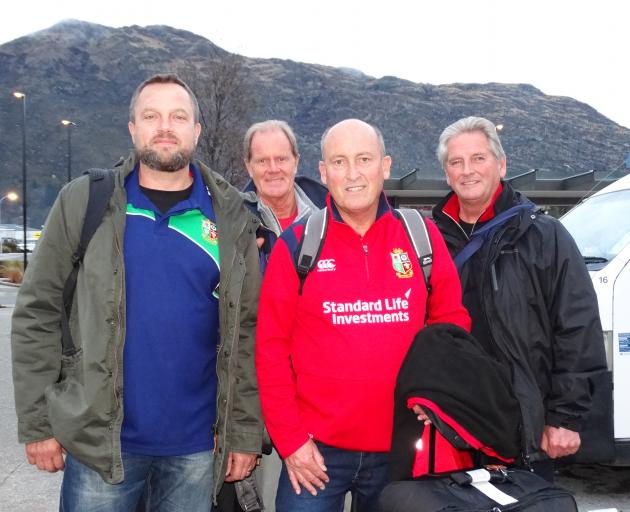 Lions fans (from left) Rob Howatson, of The Valleys, in South Wales, Mike Lowe, from Birmingham, Rob Brooks, from Cardiff, and Dave Hill, from Porthcawl, Wales, arrive at Queenstown Airport yesterday. Photo: David Williams
The adventure capital of the world is being transformed into a rugby capital for a few days.

Wave upon wave of red-clad British and Irish Lions supporters descended on Queenstown yesterday after Saturday's 24-21 win over the All Blacks in Wellington.

The Lions players, management and support staff - without coach Warren Gatland - touched down at 5.20pm on a special Air New Zealand charter jet, for three days of training, rest and recreation.

In contrast to the raucous noise from supporters at the Eden Park and Westpac Stadium test matches, the players wandered their way through Queenstown Airport relatively calmly and with little fanfare.

Captain Sam Warburton would not say anything without approval from the team's media minder.

It did not matter - the fans arriving at Queenstown Airport yesterday said it all for them.

''They were tighter,'' Lions fan John Taylor (70), of Leicester, said of Saturday night's win over the All Blacks.

''They made hard work of it and I think it helped New Zealand going down to 14 men - but even then they were winning,'' Mr Taylor said.

Wife Sandy (66) said: ''We've had loads of New Zealand fans congratulating us on our win - which you might not get if it was the other way around.''

Rob Brooks (59), of Cardiff, said the All Blacks looked nervous as they emerged from their Wellington hotel on Saturday.

''So we thought there was something going to happen, and it did.''

The atmosphere at Westpac Stadium was unbelievable, he said.

''It was a home test - there was a sea of red all over the ground.

''People were telling us that Westpac Stadium was going to be the place where we were going to win and that's what happened.''

Brooks was confident ahead of the decider at Eden Park in Auckland on Saturday: ''I think we'll do it.''

Lions assistant coach Graham Rowntree told media yesterday a break was ideal for players nearing the end of a marathon season, allowing them to prepare for one last assault.

Rugby would still be a focus.

''They need to switch off. We have done it the last few Lions series, to have a few days off after the second test because they are tired,'' Rowntree said.

''We have worked them hard. They know they have to look after themselves. They will work. They're thoroughly diligent and professional and show up for training.''

Queenstown was essentially the graveyard for England's team during the 2011 World Cup, as the players indulged in booze-fuelled antics, including, most famously, centre Mike Tindall being caught in a bar with an old flame.

Rowntree said there was no chance of the Lions' momentum being lost, as they attempt to win their first New Zealand series since 1971.

''What excites us is that there is more to come in our game. We've got the best rugby players in the home nations here and they've had a taste of it.

''The first test they were down, but we got a reaction.

''That experience and confidence we gained from last night will drive us on.''

The Lions fly to Auckland on Wednesday.