By Guy Williams
0 Comments
The area on The Remarkables where two Australians fell to their deaths is "steep and unforgiving terrain" needing specialist skills and knowledge, the Mountain Safety Council says.

Chief executive Mike Daisley said in a statement the Grand Traverse route was suitable only for competent alpine rock climbers.

Although the mountain range appeared from Queenstown to be very accessible, the deaths were a "tragic reminder" of the risks New Zealand's mountains could pose.

They were roped together and being accompanied by a guide from Wanaka-based Aspiring Guides when they fell from a cliff face about 11.45am. 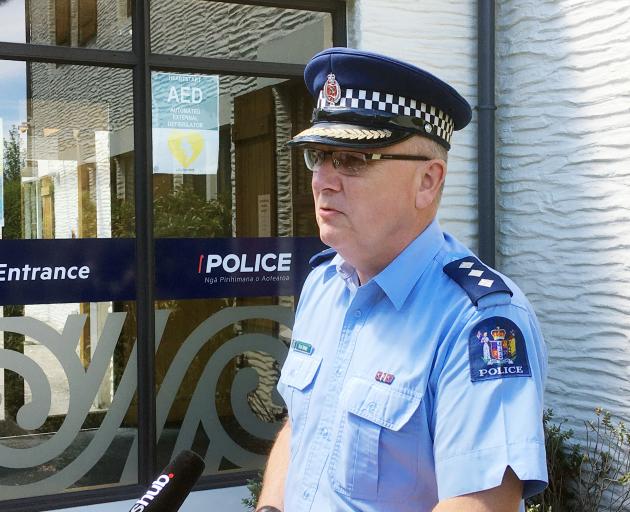 Otago-Lakes area commander Inspector Olaf Jensen speaks to media in Queenstown yesterday about Wednesday's double climbing fatality on The Remarkables. PHOTO: GUY WILLIAMS
Mr Daisley said the Grand Traverse, a one-day route that passes over 2300m-plus peaks Double Cone and Single Cone, was neither a tramp nor a trail.

"It's a serious undertaking, and not suitable for most people.

"The use of climbing ropes and specialist climbing equipment is standard practice for even the most experienced climbers.

"It's not a location you accidentally come across on an easy walk, or mistakenly find yourself in.

"If you're up there it's because you've identified it as a goal, and you've committed to the challenge."

When asked about media reports the rope they were attached to was cut by a rock, he said he could not speculate while an investigation was under way.

However, what was clear was that the guide had not been involved in the fall.

Insp Jensen said the men's bodies were found close to each other, and although Mr Spaile's body was recovered on the day of the accident, dangerous conditions prevented Mr Lentfer's body from being recovered until about 8am yesterday.

"Large hunks of snow were coming from the tops down on to the rescue site."

Police were investigating on behalf of the coroner, and WorkSafe had been advised.

In a media statement, Aspiring Guides director Vickie Sullivan said her team was "deeply saddened" and "devastated" by the double-fatality accident.

"Our immediate concern is for the families who have lost their loved ones and to support them in any way we can."

The company was carrying out an internal review of the incident, and working with the police and New Zealand Mountain Guides Association on their investigation.

Ms Sullivan thanked emergency services and the Wanaka and Queenstown Alpine Rescue teams for their quick response and assistance.