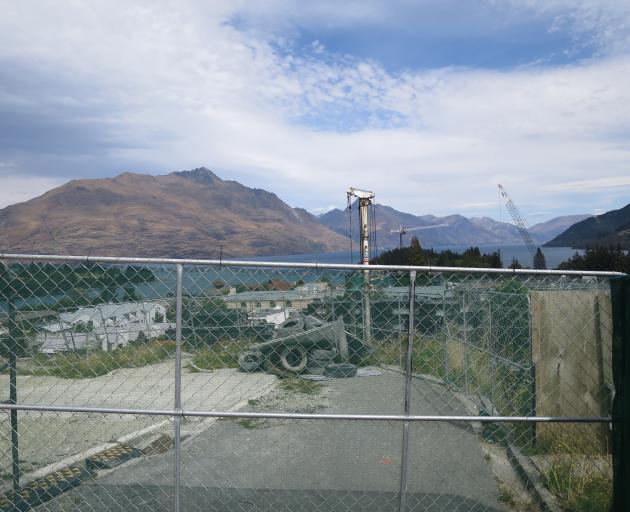 The view from the apartments at ground level. Photo: Philip Chandler
Five Queenstown Hill property owners are suing the Queenstown Lakes District Council in the High Court to protect their million-dollar views.

Dunedin lawyer Phil Page, representing the property owners, who live immediately above, said none was notified of the application.

In an email to QLDC planning head Tony Avery, he said: ''They consider themselves to be affected persons and had expressed their wish to the council to make a submission.''

He claimed the council made ''serious errors'' in assessing that his clients weren't ''affected persons'' under the Resource Management Act.

''We are instructed to apply to the High Court for orders quashing the resource consent decision.''

Mr Page also claimed QLDC made ''critical mistakes'' in its approach to ''the permitted baseline'', therefore discounting the adverse effects on his clients, namely a significant loss of their views.

Under the council's new district plan, the developer's property, 1 York St, was rezoned from ''high density residential'' to ''lower density suburban residential'' in May last year.

In approving the apartment development, however, senior QLDC planner Andrew Woodford said this wasn't a consideration as the developer, CSF Trustees Ltd, had appealed the change of zoning.

Mr Page said QLDC should have ignored that appeal, as CSF Trustees Ltd had not submitted to the proposed district plan, ''and had no right of appeal''.

In his resource consent application, he maintained that the balcony entrances to four York St apartments - owned by the subsequent objectors - will be about 23m from his building wall, and ''they are all elevated with the ability to look over the Watermark Development roofline''.

Asked to comment, a QLDC communications adviser said it ''will not be making any comment while this is before the court''.

Two of the five property owners, approached for comment, also said they would not talk for the same reason.

Another owner, veteran Queenstown weatherman David Crow, also did not want to comment, other than to say: