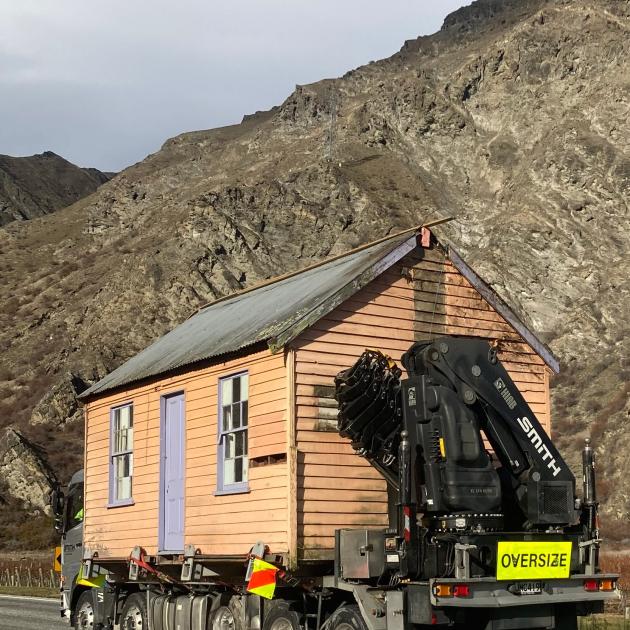 The Gratuity Cottage enters the Nevis Bluff area as it is transported to its new home in St Bathans.PHOTO: MORRIS WRIGHT
A piece of Queenstown history has hit the road.

One of Queenstown’s oldest cottages, which dates back to the 1870s, set out for St Bathans on the back of a truck driven by its new owner.

The 40sqm, one-bedroom shack with an outdoor toilet is known as Gratuity Cottage and holds a category 2 historic place listing. It is described by Heritage New Zealand as "one of the most original and unmodified early buildings to survive in Queenstown".

It is believed the cottage, originally at 9 Gorge Rd, Queenstown, was built in 1871-72 by Queenstown builder John Frederic, most likely using southern beech milled from Robertson and Co’s sawmills at Kinloch.

In 1980 it was bought by artist John McCormack — who had it removed from the council’s district plan as a heritage feature and then sold it to Kwang Soon Kim in 2013.

Mr Kim got consent to demolish the building, which sits on a 443sqm site, to make way for a townhouse development, but instead worked with the Queenstown Lakes District Council on a relocation.

Mr Kim sweetened the deal by announcing he did not want any money for the building, only some assistance with consenting and legal fees relating to its removal.

Expressions of interest were called for in February 2018 — the only one received was from Christchurch couple Morris and Anita Wright. They had bought a section in St Bathans and wanted a cottage on the site similar to the one that had been there in the 1870s, intending to use it as a holiday cottage and for it to be kept in the family.