By Guy Williams
0 Comments
Investigators are probing the cause of a spectacular fire at a Queenstown car dealership yesterday. 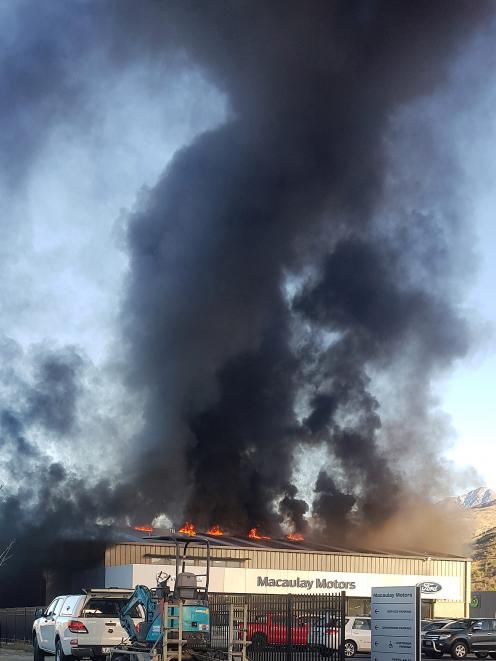 The Macaulay Motors dealership building in Queenstown on fire yesterday.

The fire, which started in the workshop at Macaulay Motors in Grants Rd, left a staff member with burns to his hands and prompted a large-scale response from Fire and Emergency NZ.

More than 30 volunteer firefighters and five fire trucks from the Queenstown, Frankton and Arrowtown stations responded after the fire threw up a huge plume of dark smoke.

A Fenz spokeswoman said the blaze was brought under control within about 25 minutes of the 9.43am alarm.

The last crews left the site about noon, although fire investigators spent the afternoon examining the scene.

A Southern District Health Board spokeswoman said the injured worker was discharged yesterday after treatment at Lakes District Hospital for moderate burns to his hands.

The 1000sq m building, which consists of a showroom, vehicle servicing centre and offices for the Ford and Mazda franchise, opened only five months ago.

Macaulay Motors marketing manager Suzanne van Pels said the company did not want to comment on the fire or the emergency services' response, as an investigation was under way. 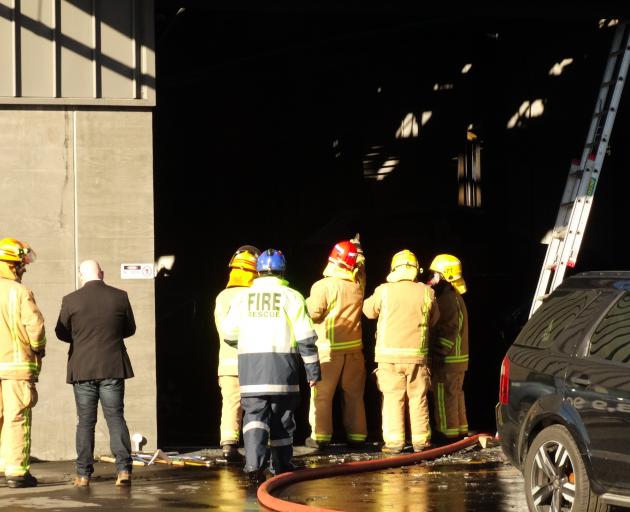 Firefighters inspect damage to the building's interior after the blaze was doused. PHOTO: SUPPLIED/GUY WILLIAMS

However, Invercargill-based chief executive Grant Price had gone to the site and staff were busy "getting customers and cars organised'', Ms van Pels said.

A specialist appliance from Invercargill was turned around before it reached the scene after it was deemed unnecessary.

There were about six vehicles in the building, some on hoists, and staff at the dealership had been working on some of them before the fire, Mr Ide said.

The presence of diesel, petrol and acetylene in the building had added to the fire's risk factor.

A witness, Alan Scottock, said he walked out of his nearby office to see a "huge plume of smoke'' coming from the dealership's roof.

He could hear "loud bangs and pops'' coming from inside.

Another witness, who did not want to be named, said he had just taken his vehicle in for servicing when the alarm sounded.

Flames emerged from the building's roof within about two minutes, he said.