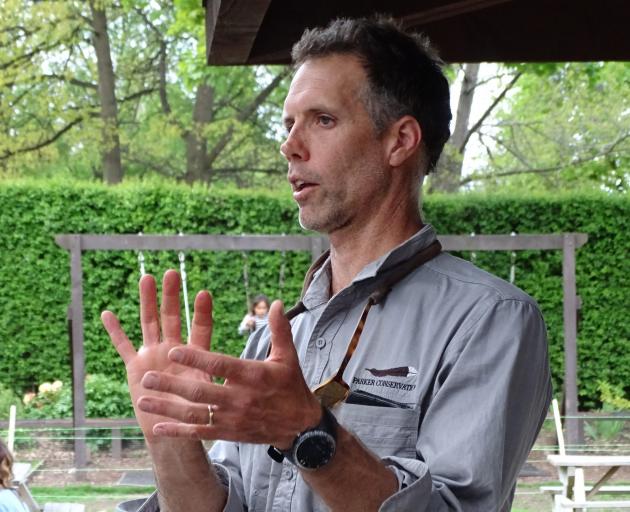 Ornithologist Graham Parker, of Parker Conservation in Dunedin, explains to Cardrona Valley residents the habits and sounds of the karearea at the Cardrona Hotel at the start of the second year of the project. PHOTO: KERRIE WATERWORTH
The knowledge gap in our scientific understanding of New Zealand’s only native falcon species in the alpine environment is starting to narrow thanks to the Cardrona Karearea Conservation Project. Kerrie Waterworth reports on the recent launch of the second year of the Cardrona Valley community project led by Cardrona Alpine Resort.

Ewan Mackie came to New Zealand from Scotland in 2008.

Working at Cardrona Alpine Resort, he had watched the karearea in the skies above the resort for many years, particularly in summer.

He had always had a passion for wildlife and the environment, but when he got talking to locals, he found out not much was known about New Zealand’s only native falcon.

"There was no central knowledge of how many karearea there were, what the birds were doing, what worked for them, were they at risk or were they fine?"

Mr Mackie raised more than $40,000 through a Birds of a Feather ball last year to establish what he hoped would be a five- to ten-year project gathering data on the birds’ breeding population and habitat, and the size of their territory in the valley.

He approached Mr Parker to carry out the field work.

Mr Parker had been studying birds for the past 20 years and said quite a bit was known about karearea in plantation forests, but there was almost no data on them in the high country.

Often known as sparrow hawks, the karearea had a territory of about 20sqkm but there could be some overlap in the Cardrona Valley because there was so much food, he said. 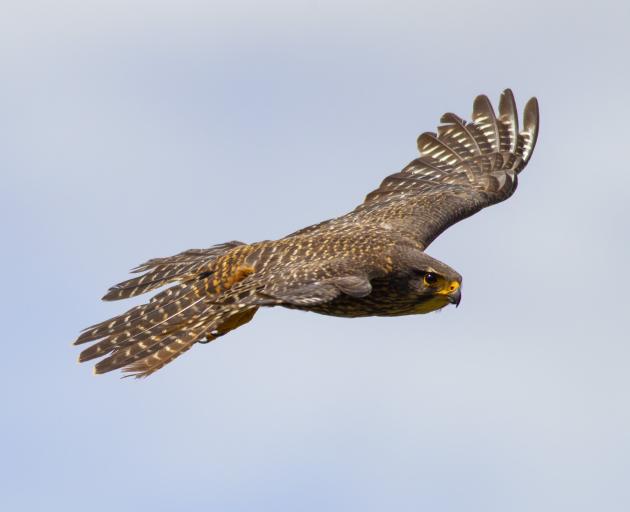 A karearea in the skies above Cardrona Valley. PHOTO: ROSS CURTIS

Possums, stoats, feral cats and wild pigs were the greatest threat to the survival of their young, but the adults risked being shot if they attacked domestic chickens and electrocuted by old infrastructure such as transformers.

"Eight hundred years ago the karearea’s only predators were avian, but once you have mammalian predators that use their nose to seek out food the karearea are doing everything wrong," Mr Parker said.

Karearea made a nest on a scrape on the ground, returned to the same site every year and usually had one clutch of eggs a year.

"Once the eggs hatch and the parents start bringing food to the nest, the chicks also become smelly so there are a lot of signs for mammals to follow," Mr Parker said.

Three confirmed nests were monitored with cameras last year, and one pair of karearea was found to have abandoned their nest after possums visited every day.

This possum visited every night until the parents finally abandoned the nest. PHOTO: PARKER CONSERVATION

In the second year of the project, Mr Parker was hoping to monitor up to six or seven breeding pairs, as six farms had given the project full access, another one "was almost on board" and many small landholders had also given permission to go on to their properties.

"It is all about community engagement", he told locals who had gathered to hear him speak at the launch of the second year of the project at the Cardrona Hotel recently.

"Your eyes and ears were really important," he said.

Karearea were very defensive of their nests and would probably dive-bomb anyone who was in close proximity.

"If that is happening, then you can save us days or even up to a week of trying to find the nest," Mr Parker said.

An oxidised steel sculpture of a karearea mounted in the car park of the hotel was officially unveiled at the project launch. 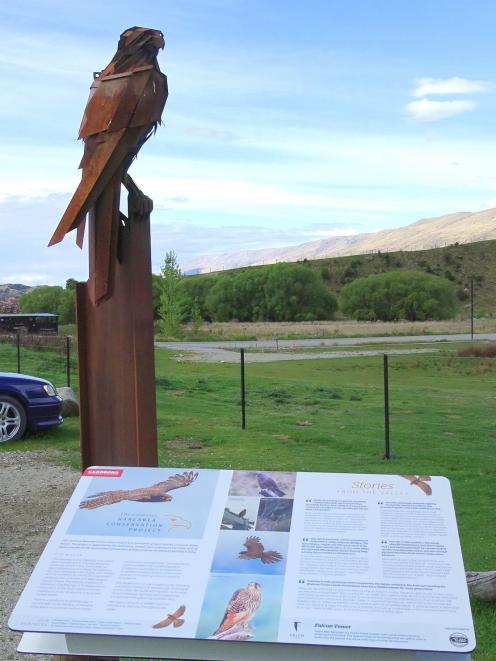 Starlings have taken up residence in the oxidised steel sculpture by Simon Max Bannister erected in the Cardrona Hotel car park recently to raise awareness of the apex predator. PHOTO: ODT FILES

Wanaka artist Simon Max Bannister, who made it to raise public awareness of the project, said he had wanted to make a sculpture that could be inhabited and represent an apex predator at the same time.

"I like to create pieces that speak for the landscape and I hope this one does.

A pair of starlings had already taken up residence inside sculpture.

A customer at the hotel reportedly told bar staff how "surprisingly small the falcons were nesting inside".