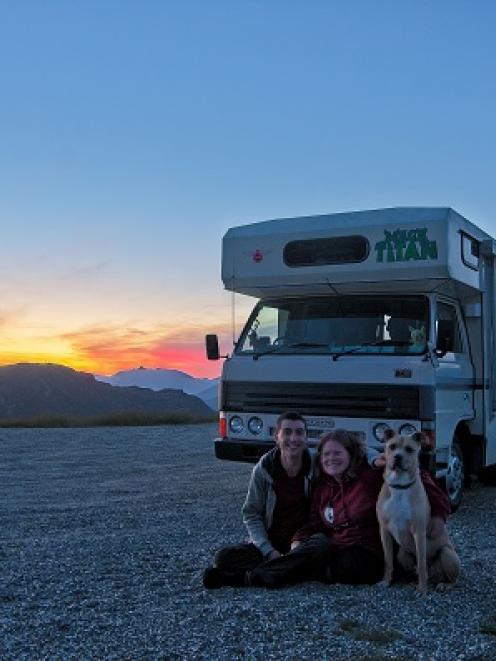 Owners Carolann White and David Perry with their dog, Daxter. Photo: Supplied
A dog owner has revealed the dramatic story of the “mind-blowing” rescue of her beloved pet after it was stranded overnight on a river bluff.

Queenstown house-keeper Carolann White and her partner David Perry took their Rhodesian ridgeback cross-breed, Daxter, for a walk alongside the Kawarau River, near the AJ Hackett Bungy Dome, at about 8.30pm on New Year’s Day.

White, 29, says Perry and Daxter made their way down to the river’s edge, while she waited at the top of the cliff, but about 10 minutes later she heard a bird squawking and “knew immediately something was wrong”.

“I looked out over the edge and saw Daxter in the river getting swept away by the current.

“I yelled out to my partner, who took off as fast as he could around the edge of the river to see where he had got to.”

White ran down the path to the river but couldn’t see either of them and says “that’s when panic set in”.

“Most of it was a blur. After that my partner came back around the rocks and I just knew by the look on his face he couldn’t find him.”

That’s when the couple, originally from Auckland, called the emergency services and were grateful to see the Arrowtown Fire Brigade team turn up about 10 minutes later.

By that time Daxter had made it on to a small, steep bluff hundreds of metres away from where he’d entered the river.

As daylight faded, the couple had to face the reality that Daxter would be staying on the bluff overnight, before the team could attempt a rescue.

The brigade made it back to the site at 6am the next day in a jetboat owned by Queenstowner Neville Kelly.

Two firefighters climbed up the bluff and retrieved him – Daxter had managed to climb even further up, and had nestled himself under a tree.

White, who was also in the jetboat for the rescue, says: “When we got back on dry land he was so excited to see my partner he found a stick and started to play.”

She says she has the “utmost respect” for the rescue team and wholeheartedly thanks all involved.

“I honestly never thought in my lifetime I would have to go through something like this but it’s nice to know there’s a team of amazing individuals who will help and give it their all.”