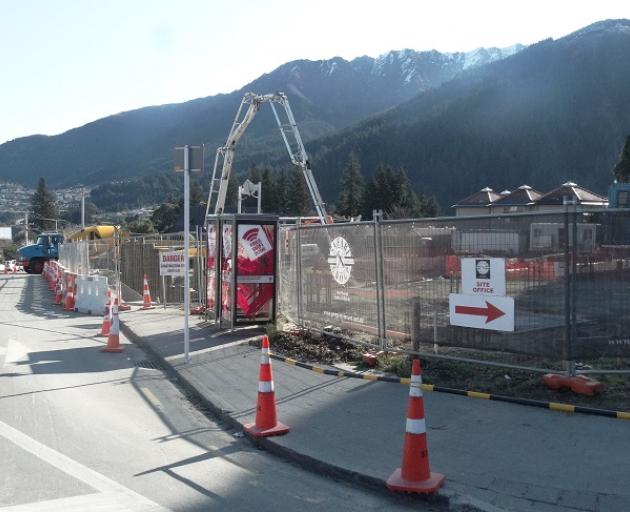 The new 131-room Ramada Hotel under construction on the corner of Stanley Street and Frankton Road. Photo: Mountain Scene

Real estate researchers claim Queenstown’s hotel developers are struggling to make their plans a reality after a surge in the number on the cards for the area.

A report published last month by real estate sector giant CBRE shows occupancy rates at Queenstown’s hotels are the second highest in the country at about 84 per cent and rising, suggesting the need for more to meet demand.

Even though dozens of new hotels are either approved or planned for the town, researchers say developers are grappling with high construction costs, a shortage of construction labour and accommodation for out-of-town workers, and high land values.

Peter Hamilton, hotels and leisure boss at CBRE and author of the report, says these challenges “make it difficult to develop hotels and make a profit despite the recent growth in values”.

“Our pipeline of hotels to be built in Queenstown has grown considerably in recent years, however the number of hotels constructed has been very limited.

“These issues are not isolated to Queenstown, with developers struggling to get hotels out of the ground across the country.”

There are currently 12 visitor accommodation developments with resource consent applications lodged, nine consented but unbuilt and five consented and being built.

Four hotel developments have been completed in Queenstown since April last year, including the 57-room mi-Pad hotel, which opened in June.

The only hotel plans declined by commissioners in recent months were for the 131-room Ramada Hotel on the corner of Frankton Road and Stanley Street.

But construction of the $52 million project started last month after a successful appeal to the Environment Court.

Commissioners’ concerns around building design and parking were resolved through mediation.

Safari Group is the developer of the Ramada Hotel, operating through its subsidiary The Frankton Trading Trustee Company Ltd.

Safari Group bigwig Robert Neil says although there’s “some truth” in CBRE’s claims, “the reality is for every problem there is a solution, albeit not all developers have access to the solutions”.

Neil says Safari Group differs from other developers in that it builds its hotels itself and has ultimate control over their delivery, whereas many others are faced with high construction costs and other challenges.