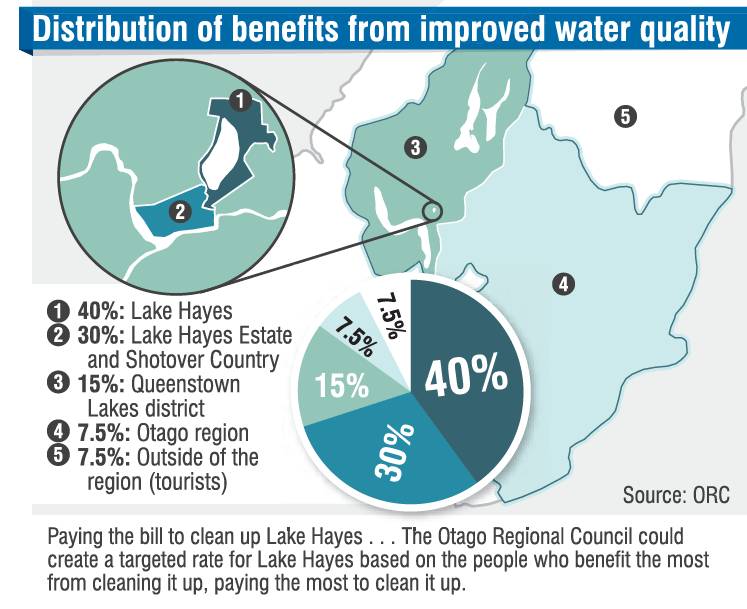 Polluters should pay for the mess they make in lakes, not those who suffer the consequences, an environmental group says.

But he criticised an approach that favoured engineering solutions ahead of stopping activities that degraded the lake.

Further, he took issue with a proposal he said could let people off the hook financially even if they benefited from spoiling the place.

"We are deeply concerned with the ... [who it is that]-pays principle the council is proposing in this case, which would set a worrying precedent whereby polluters are not held responsible first and foremost for the pollution they create," Mr Zwaan said.

The effect of intensified agriculture, the development of golf courses and low-density housing, and the modification of wetlands must all be avoided or better controlled, and their effects on the Lake Hayes catchment checked, he said.

Fixing the lake should be paid for primarily by those in the upper catchment where the majority of development and land-use decisions had resulted in pollution flowing into the lake, he said.

While it was likely that most of the landowners there now were not directly responsible for historic pollution in the catchment, they had inherited the increased financial value the land use changes and development had created and should carry more of the burden of cleaning the lake up, Mr Zwaan said in a submission to the council’s long-term plan.

Councillors will begin hearing submissions for their next 10-year plan on Thursday.

Council staff have said 70% of the money for their approximately $3.5million plan to fix the lake should come from Lake Hayes and nearby landowners in Lake Hayes Estate and Shotover Country.

The $3.5million the council believed was needed to restore the lake could be "yet another subsidy for polluters, unless they are required to fund the exercise", Mr Paragreen said.

"As a representative of anglers and hunters who have suffered from the historical degradation of Lake Hayes and stand to benefit from its rehabilitation, Fish & Game takes serious issue with transfer of responsibility from those who caused the degradation to those who would benefit from its resolution," he said. "Fish & Game submits that this approach is akin to victim-blaming or, rather, victim-funding."

The council has focused consultation on its 2021-31 plan on funding the rehabilitation of Lake Hayes, a $3.3million increase in spending on more education, engagement, and enforcement to help manage pests, and an increase of total rates for an immediate and sustainable way to pay for work required across the region.

The council collected about $27million in rates this year, it proposes to collect about $40million next year.

By 2030-31, the rate take would increase to about $65million under the proposed plan.

A spokesman said the council received about 560 submissions during consultation, which closed at the weekend.

Fish & game should pay for the damage done by thier ducks and geese. Despite the constant attacks on farmers, an environment southland project found 80% of e.coli across all the region was avian. Thats most likely ducks and geese making us sick when swimming. Pay up or fix it Fish&game