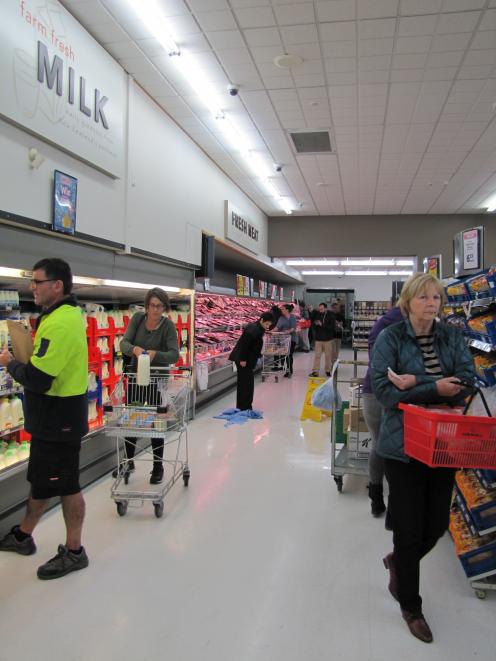 New World Supermarket staff in Wanaka mop up spilt milk after today's earthquake. Photo by Mark Price.
People ran out of buildings in Wanaka and Queenstown in panic this afternoon as a severe 5.8 magnitude quake struck.

Police say a small number of broken windows and no major reported incidents after the earthquake outside of Wanaka.

A St John ambulance spokeswoman said there had been no reports of injuries.

"We were panicked. The intensity seemed to build up."

The earthquake lasted about 40 seconds, and people outside told her they heard it coming.

"There was a roar from the direction of Treble Cone."

Did you feel the earthquake in Wanaka? Please email us with any photo/video: odt.online@odt.co.nz

Jonelle Cochrane, of West Wanaka Station where the earthquake was centred, said the shake was "definitely the biggest'' she had felt

"It was pretty scary. It was quite intense ... I think there was one centred there [at the station] not so long ago, but that [today's earthquake] was a goodie.''

She was out in the garden at the time with her 11-year-old son.

"We just kind of got into an area where there was nothing around us.''

Everything around them was "rattling'' but their house was undamaged.

"It was really noisy ... it sounded like it was echoing around the hills.''

Her husband James was out mustering at the time of the earthquake and she had not yet spoken to him.

Mt Aspiring Rd is closed at Glen Finnon bluff while contractors assess a rock fall and a crack in the road following today's quake.

In Wanaka's town centre, people rushed out of the shops and cafes into the road when the quake struck.

Wanaka New World owner Dean Bartley said "nervous" customers were told to exit the supermarket's aisles "as quick as they can" and leave the building as the quake struck.

The damage to stock was minor, with a small number of items falling from shelves on each aisle, Mr Bartley said.

"It's all cleaned up again now and we are back underway," he said not longer after the quake struck.

Some customers completed their shop after the quake struck, but others decided to go home instead.

Mr Bartley was working outside at the time and "didn't even feel it".

"I just came in and saw a few shocked people, so started to direct them."

Nick Noble, marketing manager for Treble Cone, said his and other businesses' offices in the centre of Wanaka were evacuated during the earthquake.

Mr Noble said staff up the mountain reported they had felt the earthquake, but there were no obvious signs of damage to the skifield.

Queenstown Lakes Deputy Mayor Lyall Cocks was at the golf club in Wanaka when it hit.

"There's no obvious damage, there's no poles down or nothing like that. "Like I say, it was a rolling earthquake.''

Mr Cocks said he was just about to head into town to see if there was any damage.

Meanwhile, it was an odd experience for Newstalk ZB's Chris Diack in Ashburton.

"I was on the phone to somebody in Gore at the same time and within about 30 seconds of us having a wobble here in Ashburton, we had somebody down in Gore who who was sitting in a truck who was feeling exactly the same thing.

"So I can only assume that it was working its way down the country.''

This video was filmed by Sheena Haywood at Odelay Cafe in Frankton during the Quake.

GeoNet geohazards information manager Kevin Fenaughty said the quake was felt in the southern half of the South Island, with reports of items falling off shelving as far afield as Dunedin and Invercargill.

"There was strong shaking in Cromwell, Queenstown, Wanaka and probably a little bit surprisingly also Invercargill and Dunedin.''

"When we say strong, we are talking about things have come off shelves.''

"In general we wouldn't expect anything bigger than magnitude 5.0.

"The most likely scenario is they will be smaller and they will drop away over the coming days.''

Wanaka was not known as a hot-spot for seismic activity, but it was not unknown for it to have earthquakes.

"Most of the big quakes felt in Wanaka have come from the Fiordland region.''

The quake was followed by a magnitude 3.5 aftershock at 2.36pm, also centred 30km north-west of Wanaka.

The quake caused noticeable shaking in Dunedin and Queenstown, where people ran on to the street and out on to balconies. An Oamaru commenter described it as ''a shake then a roll''.

Otago Daily Times Invercargill reporter Allison Beckham said it was also felt quite strongly in Invercargill. We are on the ground floor of a three-storey CBD building which swayed for a bit. It was a circular motion. No damage though.

Queenstown Lakes District Council communications manager Michelle Poole said so far the quake did not seem to have caused major damage in the area.

"The important thing is there have been no reports of injury of structural damage.'

"At the moment there is nothing of concern.'

A St John spokesman have received no phone calls to our Clinical Control Centre as a result of the quakes.

Welfare checks on ambulance crews and people who worked in ambulance stations and other facilities in Central Otago area were checked and reported no issues.

QLDC chief executive Adam Feeley said the council had activated its Emergency Operations Centre to assess and monitor the situation.

"We have been in touch with all emergency services and there are no reports of major damage or injury. The Police have reported a small number of broken windows outside Wanaka and our contractors advise that Mt Aspiring Rd has been closed at the Bluffs due to rockfall and a crack in the road.

"Preliminary assessments show that all QLDC's critical infrastructure is operating normally. We have begun a more detailed inspection of our water and wastewater assets and the roads, as well as the public buildings.

We have also been in touch with major tourist operators and the reports so far is that there are no issues.