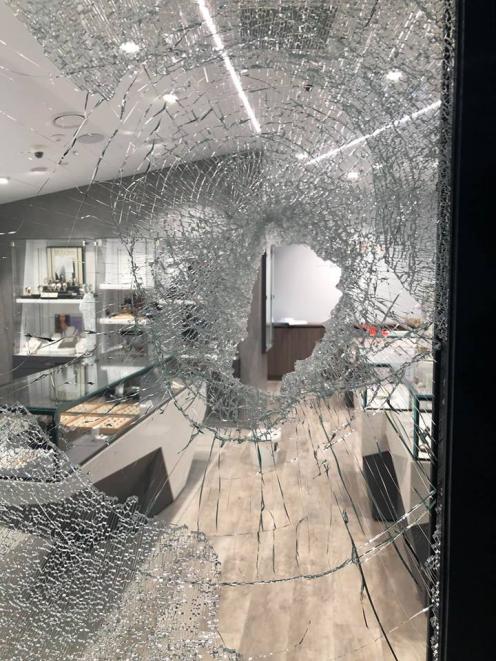 The smashed window of Jamies Jewellers in Queenstown after a Saturday night watch heist. PHOTO: SUPPLIED
Police say they are hot on the trail of the burglar responsible for a smash-and-grab raid at a Queenstown jewellery store on Saturday night.

The burglar appears to have evaded police on his mad dash to Southland after the midnight heist.

Police tried to stop the vehicle early yesterday but the driver kept going, sparking a brief police pursuit which was soon abandoned due to the speed and manner of driving of the vehicle.

Police have now established that a car they believe is linked to the burglary which fled from police in the Dipton area had a rear registration plate (LQL818) which had been stolen from a rental vehicle (a red Toyota) in Queenstown.

The car involved in the fleeing driver incident is now believed to be a grey Toyota Corolla, which had also been stolen from Queenstown.   It’s actual registration is KHN571.

Police believe that the offender in the Queenstown burglary is travelling in the grey Toyota Corolla, and it is appealing for any sightings of the vehicle in the Queenstown or Southland areas since Sunday night.

Meanwhile, the store manager says he has supplied clear CCTV footage to police showing the unmasked man casing the premises before the burglary.

The man helped himself to about a dozen men's watches, a laptop computer and cash from Jamies Jewellers in Frankton's Queenstown Central shopping complex.

The clear footage from his new surveillance system showed the man's face as he cased the premises, before returning with his face masked to smash his way in, he said.

"Then it shows someone coming back who looks pretty much the same, but with a mask and a hood on, smashing his way in, opening the door, then breaking into the cabinets and getting the watches, finding a laptop and making his merry way out."

The Queenstown branch opened just before Christmas but the Central Otago business had been running for more than 150 years through five generations of family ownership, making it the oldest jewellery store continuously owned by the same family in New Zealand, he said.

The items taken were between 12 and 15 men's watches valued at up to $1800 each, including models of the Seiko, Citizen and Baby-G brands.

Also taken were a grey Microsoft Surface laptop and $150 cash.