By Guy Williams
0 Comments
More than 170 people braved the cool waters of Lake Wakatipu — some without wetsuits — in the inaugural Wakatipu Legend swimming event in Queenstown on Saturday.

They swam 3.8km, 1.9km or 1km, the two shorter events being there-and-back swims from the beach in Queenstown Bay.

Those tackling the longer distance began in the water in Frankton Arm, swimming beside the Frankton Track and around the Queenstown Gardens peninsula before heading into the bay.

Entrants are all smiles before the start of the 3.8km Wakatipu Legend swim at Lake Wakatipu’s Frankton Arm on Saturday. PHOTOS: SUPPLIED
Co-organiser Richie Lambert was "super-pleased" by the way the event went and the positive feedback he and fellow organiser, Lucas Fornes, had received.

The calm conditions were ideal, about 25 swimmers choosing not to wear wetsuits in the 14degC-15degC water.

Although some had come out of the water feeling cold, no-one needed medical attention, Mr Lambert said.

Sol Gonzalez, of Dunedin, said her 1.9km swim was an "amazing" experience.

The Argentinian national said she had not trained for the event, but kept up her swim fitness through her job as a lifeguard at the St Clair Hot Salt Water Pool. Also swimming the 1.9km was Waimate man Hamish McFarlane, who said he tacked the event on to a four-day holiday in the resort with family. 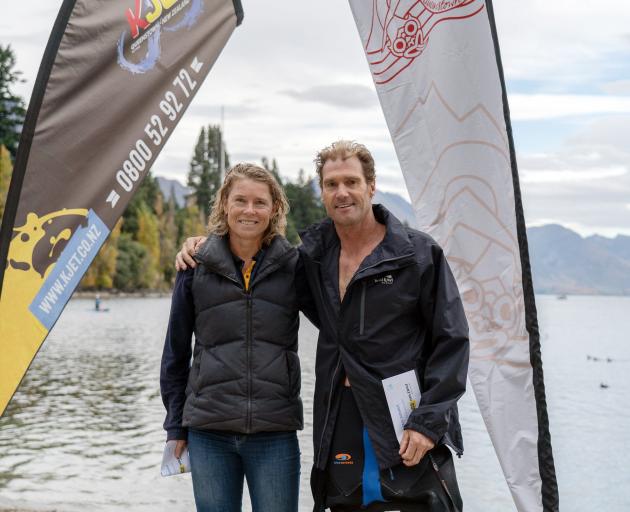 Anne Gray, of Dunedin, and Brent Foster, of Auckland, celebrate their victories in the 3.8km event.
Although the swim was "quite hard", and he had felt cold at first, he quickly warmed up.

It was only the fourth such event he had entered, after doing the swim leg of Challenge Wanaka with friends in February, Mr McFarlane said.

Mr Lambert said most participants were from Otago and Southland, but some had come from Auckland, Wellington and Canterbury, ages ranging from teenagers to over 60.

The first male home in the 3.8km Legend swim was Brent Foster, of Auckland, in 46 minutes and 19 seconds, while the first woman was Anne Gray, of Dunedin, in 55min 2sec.