After 65 years of marriage, Queenstown couple Pat and Shirley Paulin have learned a thing or two about relationships.

On Thursday morning, to mark the anniversary of their nuptials at Dunedin’s All Saints’ Church in 1956, Mr Paulin surprised his wife with a bunch of flowers, a dinner booking at a swanky restaurant, and, more riskily, news an Otago Daily Times reporter would be visiting.

However, the ODT’s visit does complete a circle; 65 years ago today an article about their marriage, headlined "City Wedding of Interest to Central Otago", appeared in the newspaper.

The couple, who met at a leadership course in Dunedin, are strong advocates for marriage. 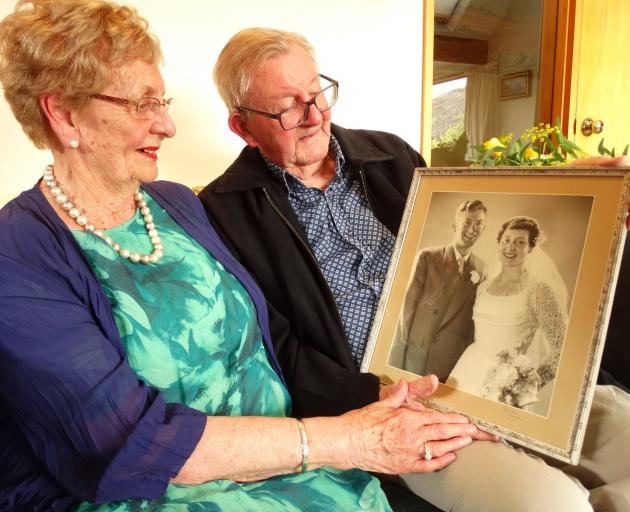 Shirley and Pat Paulin reminisce about their wedding day in Dunedin 65 years ago on Thursday. PHOTO: GUY WILLIAMS

Mrs Paulin, who did not want to reveal her age — "people can work it out"— said while she accepted many young people opted for a de facto relationship, getting married showed a long-term commitment, and provided greater incentive to navigate difficulties.

Getting married while relatively young also had benefits.

"You mould together more — when you’re older, your ideas become more set, and it’s harder to change them."

Their marriage had benefited from them sharing many interests, particularly in sport, gardening and history, while also having individual pursuits.

Mr Paulin said they shared everything, took an interest in what the other was doing, and "all the decisions we’ve made have been mutual decisions".

"Sure we have our disagreements at times, but we work them out."

The couple, who have lived in Queenstown for the past 35 years, live in their Frankton home with help from a volunteer carer and support workers.

Mr Paulin is a retired teacher and principal who spent most of his career at rural schools in Otago, Southland and South Canterbury.

His final position was principal of Grant’s Braes School in Dunedin.

His wife had been heavily involved in community organisations wherever they lived, and had a knack for making friends, he said.