Meteor or plane? Mystery object in air over Queenstown

A UFO caught on camera by a Queenstown man on Wednesday night was most likely a Boeing 787 Dreamliner, according to one Otago Daily Times reader.

However, other readers have other suggestions.

Matt Wilcox was out for a walk in the resort on Wednesday night when he spotted something odd in the sky.

Catching the object on camera, he said it was visible for about a minute before it went behind the Remarkables and out of sight.

Southland Astronomical Society astronomer Mike Bailey examined the footage and believed it was not a plane because it was moving too quickly and said the best possible explanation was that it was a meteor entering the Earth's atmosphere''.

"It's likely nothing would have hit the ground, and that it was possibly as small as a golf ball, or even smaller."

Mr Bailey said this kind of activity was more common than most realised; tonnes of material entered the atmosphere each day. 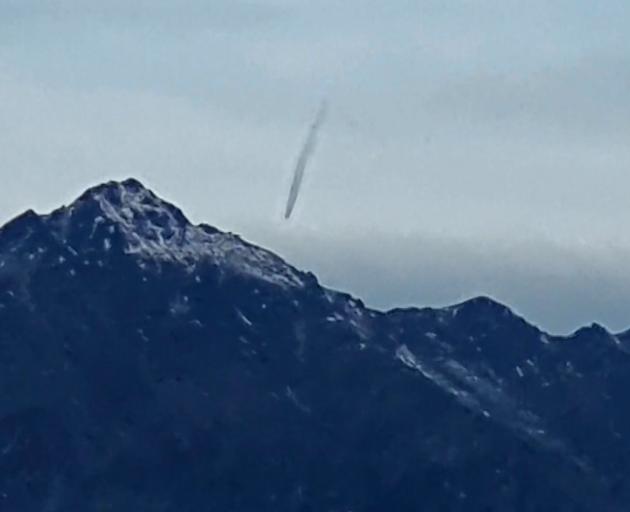 Queenstown resident Matt Wilcox was lucky enough to witness what was probably a meteor on Wednesday evening. Photo: Matthew Willcox

The video, which was posted on social media, had some viewers speculating it could have been an asteroid.

However, Mr Bailey said that certainly was not the case.

"If that was an asteroid that came in Queenstown probably wouldn’t exist any more."

A Dunedin resident contacted the ODT this morning to say she, too, had seen the object in the sky, describing it as "the strangest thing we've seen".

The woman, who asked not to be named, was walking with her children about 5.45pm on Wednesday when they saw "a black line go vertically super high for probably close to a minute in the air, then stop".

"It turned and it became a wide horizontal line, with a black thing looking like a helicopter, but super high, right across the sky, then it disappeared."

They initially thought it may have been a "rocket launch" from Central Otago, or a satellite, or maybe a plane from Central America "and the curvature of the earth was fooling our eyes".

"But the black trial behind the first part was super odd.

However, reader Bruce Smaill said the object was most likely a LATAM airlines Boeing on the way from Sydney to Santiago, Chile.

"It was flying at a height of 37,000 feet, so the cloud it was underneath must have been extremely high.

"The aircraft was visible over Dunedin as well and was followed by a second aircraft about an hour later."

Not convinced. By the time a golfball size object lost enough altitude to be below the clouds, it would have slowed to terminal velocity, a few hundred km/h at most, have cooled considerably, and not made a big smoke trail like that. Not saying it's def not from space, but doesn't look like what a small meteorite (assuming it made it to the ground) would do. That would look more like a rock being thrown from a plane, no way you could see that over a mountain several tens of kms away.

Being a retired airline pilot I am 99.9% certain this is a jet airliner at cruising altitude. The contrails are produced by water vapour in the exhaust of the engines condensing in the very cold (-50 degrees C) temperature at altitude. Sometime the contrails can start and stop because the aircraft flies though differing temperatures in the atmosphere or the engine thrust settings changing during a step-climb or descent. I agree it is probably a B787 - only because I have seen it before and was able to see its track on Flight Radar 24, Sydney-Santiago.