Mixed results so far this winter for resort businesses 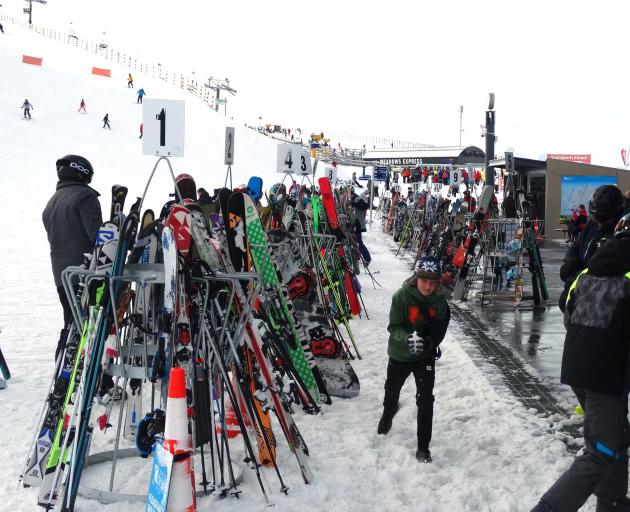 Visitors and snow gear outside Coronet Peak’s base building this week. PHOTO: GUY WILLIAMS
It has been a mixed bag on Queenstown's skifields so far, so it is hardly surprising the same is holding true for some resort businesses.

Two business owners, covering the hospitality, ski rental and ski retail areas, say the lack of natural snow is having an impact, but not a dramatic one.

Browns Ski Shop owner Kris Vermeir said turnover across his retail and ski rental business so far this winter was down overall because of the "perceived lack of snow".

"The reality is there is a lack of snow, but there is still skiing and snowboarding to be had."

The Remarkables and Cardrona Alpine Resort were holding their own because they had received more natural snow, and while Coronet Peak did not look appealing because it was bare off-piste, the man-made snow there was "bloody good".

Pre-season business had been strong as locals geared up, but had slowed down as the natural snow stayed away, Mr Vermeir said.

"During the school holidays we've definitely lost ground compared to last year, and that's purely because the snow is not as good as it could be.

"School holidays are crucial for us - they probably represent about 30-40% of our turnover during that two weeks."

Lone Star restaurant and bar owner Dave Gardiner said he had heard some gloomy stories before he returned from an overseas holiday last month.

Many business owners had told him they were having one of the quietest off-seasons in memory, so he was pleasantly surprised to find business was steady when he got back.

"We got off to a wee bit of a slow start because of the [snow] conditions."

Since then it had been a "pretty standard" winter.

He had hosted some visitors to the resort who had never skied before, and for them, the conditions on the skifields were fine, he said.