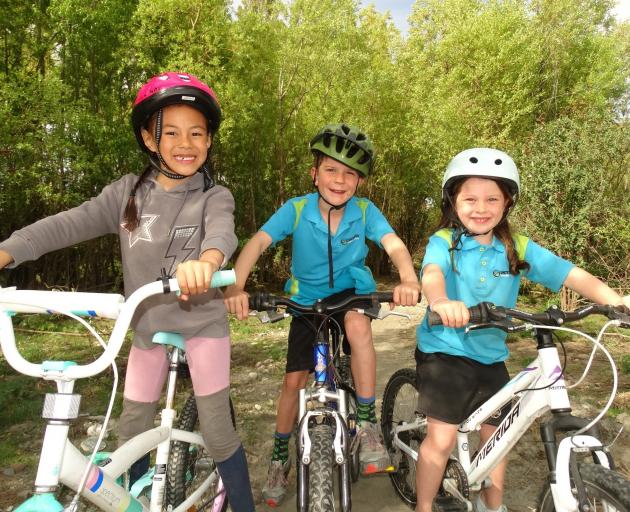 About to tackle a new bike trail on the Shotover River delta are (from left) Esther Nai (6), Austen Morris (7) and Ella Brown (6). PHOTO: GUY WILLIAMS
A new mountain bike track built by tourism workers near the Queenstown suburb of Shotover Country was officially opened at a community event this week.

The 1.2km loop trail was built on the Shotover River delta over a period of four weeks in June and July by members of the Workforce Alliance, a post-Covid initiative that employed more than 50 staff from AJ Hackett Bungy, Go Orange, Canyon Swing, Ngai Tahu Tourism and Skyline to work on eight conservation or recreation projects throughout the Wakatipu.

The work was funded by the Department of Conservation’s pilot programme for "Jobs for Nature", and managed by the Queenstown Lakes District Council’s parks and reserves team.

To the great surprise of the trail’s designer, Fraser Gordon, it was officially named "The Sweet Robbie", after his son, at the opening.

Mr Gordon said the "easy" grade 2 track was suitable for everyone from novice riders to adults.

Lake Hayes Estate and Shotover Country Community Association chairwoman Anita Golden said that residents were "delighted and grateful" for the trail and other track improvement projects in the area.

"It normally takes a lot of time and volunteers to get these kinds of projects completed, so to have it ready within three months is a fantastic achievement," Ms Golden said.

"It’s really helped our local community get out of their houses and enjoy family time outdoors, which is great for their mental and physical wellbeing during a difficult time."

Workforce Alliance team member Tony Banks said he had enjoyed the positive feedback from locals while helping build the track, and was looking forward to bringing his children to try it out.