One eye on the golf, the other on the view 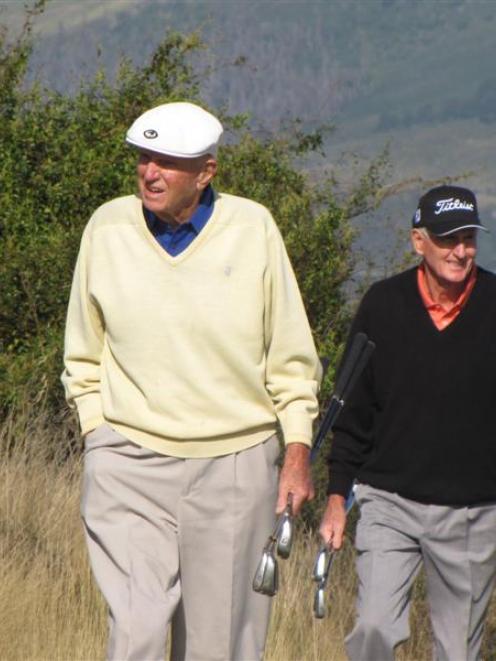 Former NZ PGA champion Bob Glading and New Zealand legend Sir Bob Charles head to the tee yesterday. Photo by Tracey Roxburgh.
"Chief" Don Cheadle went into the NZ PGA Pro-Am seeding tournament at Jacks Point, near Queenstown, yesterday backing his chances to win the tournament, despite missing a birdie on the 6th "by an inch".

The Hollywood actor, who is in the resort with his family to take part in the inaugural Pro-Am at The Hills, ended yesterday tying with New Zealand Prime Minister John Key, both finishing 21 over par at 93 on the par-72 course.

After beginning his morning with a traditional powhiri from members of the resort's Kiwi Haka group, Cheadle started his round at Jacks Point, teamed with Sir Michael Hill.

So far his Queenstown experience had been "a lot of fun", with yesterday's highlight the official Maori welcome, he said.

Dubbed "Chief Don" by the Kiwi Haka group, he said he was having a "great time" and was confident of success.

"I think we're going to win this thing."

He'd also been doing some location scouting with his producer's hat on, asking "what else could you want?".

Prime Minister John Key was paired with teenage golfing sensation Lydia Ko - the standout winner yesterday, who finished her round four under on 68.

Mr Key used the media scrum as an opportunity to showcase some of the resort's most spectacular views for the national and international media - ending up in tussocks near the 7th hole.

Meanwhile, the tournament's oldest competitor, 92-year-old Bob Glading - who was paired with Sir Bob Charles - said for a moment he was confused about his whereabouts.

"I wondered if I was still here - I think I'm in heaven."

Meanwhile, former double All Black Jeff Wilson got the better of former team-mate Justin Marshall yesterday, Wilson ending the seeding round 18 over par on 90, with Marshall coming in at 97 - 25 over par.

At Hilton Queenstown last night the card was announced for the weekend event, which will see the amateurs matched with professionals based on their seeding rankings.