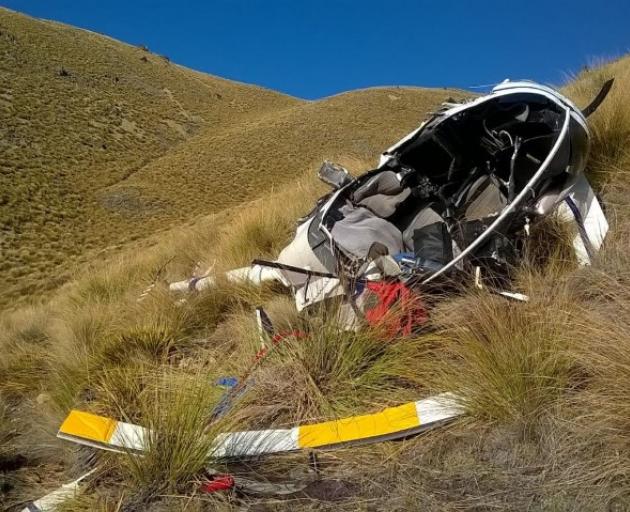 Wreckage at the site after the crash. Photo: CAA Safety Investigation Unit
Risk assessment records of a company owned by a pilot involved in a helicopter crash that killed his business partner were "misplaced", a court heard.

Pilot Murray Sarginson, of Athol, was flying a Robinson R22 helicopter with his passenger and business partner, Otautau man Liam Edwards, when it crashed in foggy conditions near Lindis Pass on April 30, 2016.

The two men were travelling from Athol, in Southland, to Mt Algidus Station, in Canterbury, when the incident took place.

A book containing a hazard register of their earthworks and contracting business, Ag Works South Ltd, was unable to be found inside accommodation it was kept in at Mt Algidus Station following the crash, the Queenstown District Court heard yesterday.

Colin Withnall QC, defending, told the court there had been "considerable criticism" of Sarginson's health and safety practice and the "absence of records".

Sarginson said his company had a "full health and safety plan in place" for work carried out around the Mt Algidus Station site.

"Our procedures that were put in place were based on Ag Works protocol.

"It was part of our risk management. Everything was kept in a book that was our hazard register.

"Even the station's health and safety policy we went through with them."

Sarginson said the documents were kept on a table in part of the accommodation at Mt Algidus Station, and he had seen them on the table when he visited a week before the crash.

He told the court he went back to the accommodation to look for the documents after being interviewed about the crash but the book could not be found.

"I had no problem giving it to the Civil Aviation Authority [CAA]," Sarginson said.

The CAA suggested Sarginson was flying an overloaded helicopter in poor conditions, with new father Mr Edwards (32) on board.

Sarginson is facing five charges under the Health and Safety at Work Act and the Civil Aviation Act, including reckless conduct and exposing individuals to risk of death or serious injury.

Mr Withnall argued the crash did not take place while Sarginson was at work.

He told the court the pair were flying to go on a hunting trip for the day before starting work.

Sarginson said he would usually go hunting around Mt Algidus Station either before or after work, which he described as an "ideal situation".

Health and safety specialists previously told the court they viewed the flight as a commercial flight for work and claimed Sarginson failed to adhere to the legal standard of care at work and recommended practices for safe flying.

Mr Edwards died at the scene soon after the crash and Sarginson suffered injuries to his head and chest.

The trial is expected to continue today.