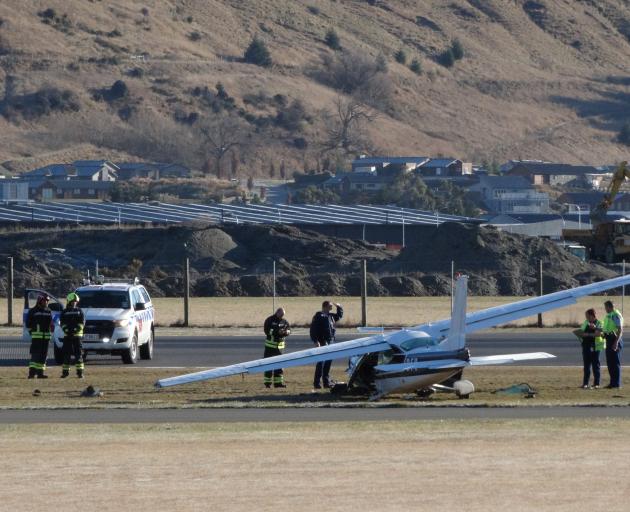 Police and Queenstown airport fire rescue staff examine the Cessna 177 damaged in an emergency landing alongside the airport’s runway in August 2017. PHOTO: GUY WILLIAMS
A commercial pilot who failed to de-ice the wings of a light aircraft which crashed at Queenstown Airport has had an appeal dismissed.

Yannick Chatachvilly (34) appealed the district court judge's decision not to grant a discharge without conviction, and the sentence imposed as manifestly excessive.

He had been made aware of the ice and frost on the wings of the Cessna 177 by his passengers before take-off on August 15, 2017.

He brushed some off with his hand and said the rest would "blow off" naturally.

The engine failed on take off and the plane crashed moments later, coming down on grass to the side of the runway.

The three passengers sustained minor injuries - cuts, bruises and sprains. One was partially ejected and the plane suffered significant damage.

Chatachvilly pleaded guilty to operating an aircraft in a manner which caused unnecessary danger to its passengers. He applied for a discharge but was convicted and fined $2600.

His solicitor for the appeal, Tim Mackenzie, argued Judge Brandts-Giesen erred in assessing the seriousness of the offending by finding Chatachvilly "contributed significantly to the accident, causing much damage to the plane, and considerable injuries to the passengers".

Mr Mackenzie submitted that engine failure caused the crash, not the ice on the wings.

However, Justice David Gendall, in his October 25 appeal decision, said, even accepting that argument, "whether that danger contributed to the crash is not the issue to be determined.

"It is the risk of the danger in question that is the offence."

"He was not guided by what the overall outcome was (being the crash of the aircraft) but rather he focused on the appellant's failure to take the required precautions."

Justice Gendall said had the plane not crashed Chatachvilly might not have been apprehended "but he would have committed the offence either way".

He said "a wing covered in ice has poor lift and is considerably less stable. The appellant's actions severely compromised the safety margin within which the aircraft could operate".

The discharge application had focused on Chatachvilly's immigration status, his job opportunities and general stigma.

Justice Gendall said immigration issues were for Immigration New Zealand to decide upon and the stigma was proportionate to the offence, as was the likely adverse effect on his career.

"Airlines are sophisticated employers and should give the appellant an opportunity to explain the incident when applying for employment."

He agreed the consequences were not out of all proportion with the offending.

He also determined the $2600 fine was not manifestly excessive.

"I agree with the judge's view that the appellant's conduct was somewhat cavalier and not of a standard one would expect of a commercial pilot with passengers on board."