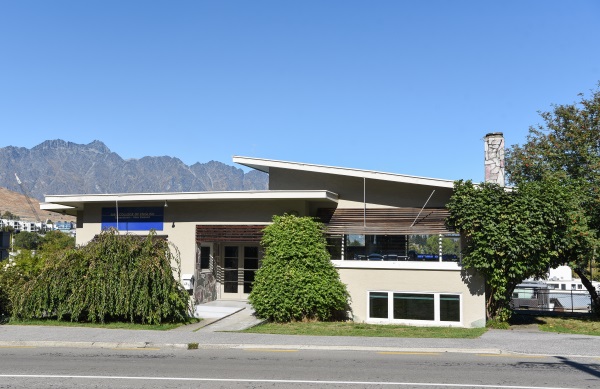 The dwelling at 10 Man St. Photo: Mountain Scene
A prominent property overlooking Queenstown’s CBD has sold to a local buyer for $3.1  million plus GST.

The two-level character dwelling at 10 Man St recently served as the police station for the first two series of locally-shot TV crime thriller One Lane Bridge.

Earlier, it housed a language school for many years.

The Auckland-based vendor had owned the property since the mid-’90s but decided to sell due to a ‘‘change in circumstance’’.

Their sales pitch emphasised the 339 square metre site’s prime location, between the Brecon St steps and the Man St carpark, just down from the Skyline gondola, as well as its
valuable town centre zoning, and therefore redevelopment potential.

However, Fea says the new buyer is intending at this stage to retain the building, which is thought to date back to the early ’60s.

Meanwhile, a Queenstown CBD property at Beetham St, bordering the site of a planned new civic and cultural centre, sold under the hammer on Thursday for $3,225,000, almost $1m more than its rateable value.

Rodney Green, one of the vendors of the six-bedder, on an 875sqm section, says it’s a “good result” and he’s looking forward to seeing what the buyer does with the place.

“We’re pleased to see the place will move forward.

“If we’d been 30 years younger, we would’ve done it ourselves.”

His late parents, George and Hannah Green, built the house for their retirement after buying the land for $25,000 in 1972.

It had been rented out for about a decade since their deaths.

It used to border the town’s public swimming pool and the former Queenstown primary school, which later became the high school.

The property sits inside the resort’s town centre boundary, so can be developed for commercial, retail, residential or visitor accommodation use.

It’ll eventually be bordered by two major developments: a town centre arterial road of which construction started last week and a civic, cultural and office complex Queenstown’s council and Ngai Tahu plan to start building in 2026.