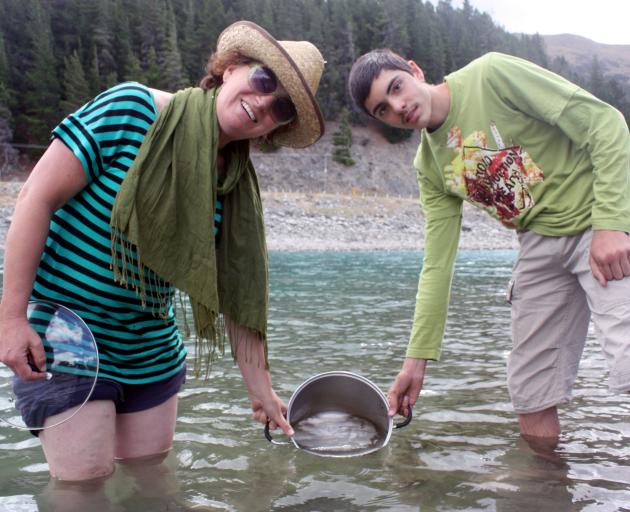 Gathering fresh water from Lake Hawea near the dam yesterday are Lake Hawea residents Pip Harker and Nicholas Rumore (15). Ms Harker has been using the lake or a spring in Wanaka instead of the chlorinated water in the Lake Hawea supply. Photo by Tim Miller.
Opponents of the decision to treat Lake Hawea township's water supply with chlorine are planning to make their voices heard at a public meeting on Saturday.

The Queenstown Lakes District Council's decision to chlorinate the water is likely to be one of the main issues discussed at the Hawea Residents Association annual public meeting at the Lake Hawea Community Centre.

Hawea Stand For Pure Water member Pip Harker said she hoped everyone who opposed the council's forced chlorination would show their opposition at the meeting.

''I think we need to be passionate about what we believe in and be loud about it ... none of this reserved Kiwi stuff - we need to let them know how we feel.''

People in Lake Hawea were proud of their untreated water supply and were angry it had been taken away from them. Some residents were concerned about possible health risks associated with chlorinated water but most were frustrated they had no say in the matter, Ms Harker said.

An online petition asking the council to remove the chlorine had been signed by more than 130 people since Sunday.

''I think at first people were a bit shocked about what happened but now people are starting to get angry and frustrated.''

In December, the council announced it would chlorinate the water supplies in Lake Hawea, Arrowtown and Glendhu Bay on advice from Public Health South after water contamination in Havelock North

Permanently treating all residential water supplies in the Queenstown-Lakes district would also be investigated, the council announced at the time.

Council chief engineer Ulrich Glasner will attend the meeting on Saturday to answer questions and explain the reasoning behind the treatment.

Mr Glasner could not be contacted yesterday but told the Otago Daily Times last year any decision to chlorinate the supply permanently would be subject to full community consultation.