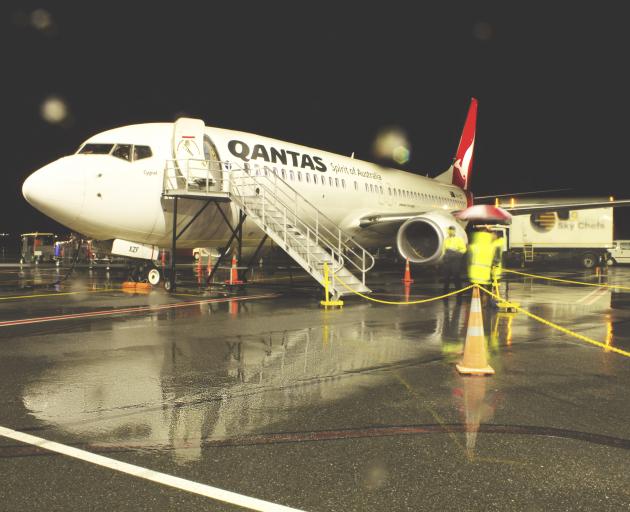 The first Qantas night flight to Queenstown on the airport's tarmac on Saturday. Photo: Supplied
Australia's national carrier has rounded out a quartet of airlines flying to Queenstown after dark.

At 6pm on Saturday, Qantas flight QF181 landed its first evening flight to the town, from Sydney.

The plane left at 7.15am yesterday - the resort's first overnight international flight.

''It's a shame we couldn't have put on better weather but hopefully those on board will enjoy the new snow it's brought to the skifields,'' he said in a statement.

Now, all four airlines that fly to the town operate night flights.

Mr Keel: ''It's a huge achievement and the culmination of more than four years of hard work and collaboration by all of the organisations involved who shared a vision and commitment to safety to make after-dark flights a reality.''

Qantas' Sydney-based corporate communication manager Jessica Richards said in a statement higher than expected demand led the airline to add two flights a week on its Sydney to Queenstown route during the July-August ski season peak.

That increased Qantas' flights to and from Queenstown to 10 a week over winter.

Recently, the Australian airline announced it would continue daily direct flights between Sydney and Queenstown year-round.

Mr Keel said evening flights reduced peak-time pressure on the airport's facilities and services during winter, in the face of rising passenger movements and traffic volumes.

Night flights were also a better use of the airport's consented operating hours of 6am to 10pm, Mr Keel said.

However, they have not been without controversy.

On May 20, a Jetstar flight bound for Melbourne took off at 10.14pm, which breached the airport's resource consent.

After-dark flights for Queenstown were first mooted in 2002.

Transtasman civil aviation regulators signed off the foundation safety case for night flights in May 2014.

Two months later, a senior airline pilot told Mountain Scene he would be ''very uncomfortable'' landing in Queenstown at night.

In November 2015, the New Zealand Air Line Pilots' Association said it had not been properly consulted about the safety case for night flights and it was not happy with safeguards.

Not much has been heard from the association since, however.

In April this year, a $750,000 project to groove the airport's runway was finished.