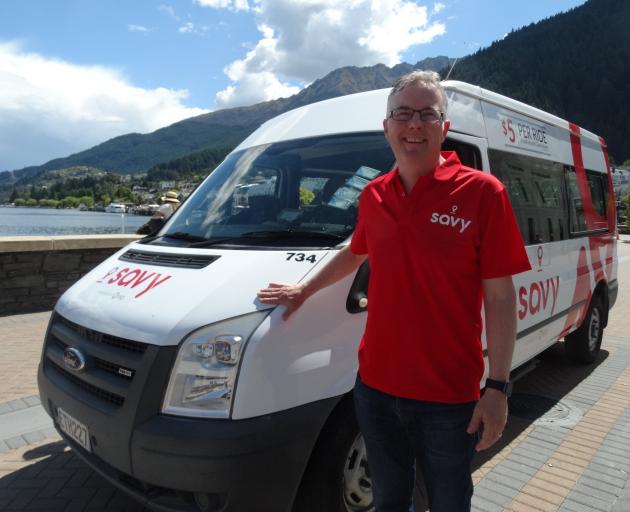 Go Bus director Russell Turnbull with a Savy ride-share minibus in Queenstown last November. PHOTO: PAUL TAYLOR
Ride-sharing app Savy is pulling out of Queenstown after a 12-month trial, citing a saturated local market and the opportunity to integrate with public transport elsewhere.

Since then, private hire app giant Uber has entered the resort's market, along with dozens of minicab-style operators following the deregulation of the taxi market.

Savy's point of difference was to use branded minibuses and real-time technology to enable drivers to pick up multiple fares at once, cutting the cost.

Go Bus director Russell Turnbull said: "It's gone OK ... obviously not a raging success but enough to give us confidence it's worth continuing elsewhere in the country.''

The company has a trial starting next month on the Devonport Peninsula in Auckland, the Canterbury Regional Council is also exploring the idea and a Timaru feasibility study will start soon.

"In Queenstown there has been a rapid increase in transport options. It's a shame Savy can't be part of that for the foreseeable future, although we never say 'never'.

"This is no criticism of Queenstown but elsewhere in the world these services are working well as what we call the `first and last mile', so integrated with public transport.''

Savy launched in Queenstown with a $5 flat fee but soon became zone-priced. Still, it was generally cheaper than taxis and more convenient than buses, making it relatively popular with customers.

Meanwhile, 109 submissions were made on the Queenstown Lakes District Council's proposed Traffic and Parking Bylaw 2018.

The vast majority of submissions support the changes. Submissions will be heard on Thursday.