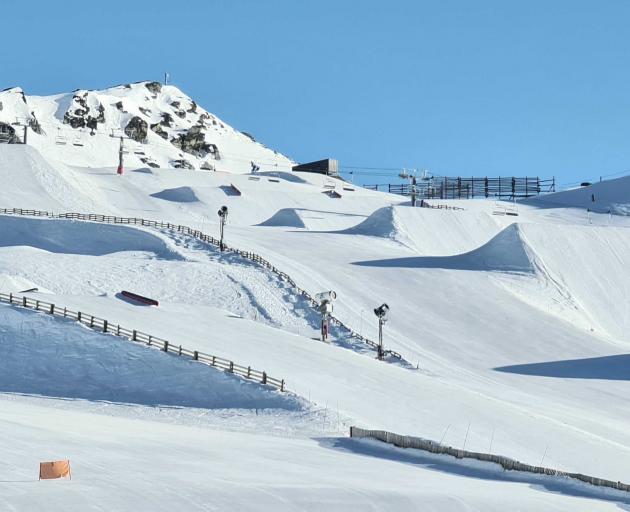 Cardrona skifield. Photo: Cardrona Alpine Resorts
Lockdown and the end of the transtasman bubble has had a devastating impact on southern skifields, leading to more than $3 million in wage subsidy claims.

Between them NZSki, which owns The Remarkables, Coronet Peak and Mt Hutt, and Cardrona Alpine Resort, which owns Cardrona and Treble Cone skifields, claimed about $3,039,500 from the wage subsidy for a combined 1906 staff last month.

The main difference between this lockdown and the others was both operators were "fully resourced" and expecting a busy season servicing the Australian and Auckland markets.

But following the rapid loss of both markets, last weekend was the first skifields could open under Level 2 restrictions.

Despite good numbers since reopening, both NZSki chief executive Paul Anderson and Cardrona chief experiences officer Bridget Legnavsky said they expected to meet the threshold for the third round of wage subsidy payouts.

Mr Anderson said about 600 people arrived simultaneously at The Remarkables on Saturday morning, forcing the skifield to announce capacity at 8.30am. Coronet Peak reached capacity at 11.30am.

To claim the wage subsidy while in Level 2, businesses must prove a 40% drop in revenue was caused by Auckland’s higher alert level.

"We have to wait and see what our revenue is doing ... I’m reasonably confident we will meet the criteria for a third wage subsidy," he said.

While skifields made the majority of their annual profit in July, August and September, a lockdown in the middle of peak season meant NZSki’s revenue dropped 95% in the first two weeks of last month’s lockdown and Cardrona Alpine Resort revenue was down 100%.

Weekly visitation for both operators was down for obvious reasons, Mr Anderson said. Aucklanders made up about 25% of weekly visitors across The Remarkables and Coronet Peak and Australians usually accounted for up to a third.

"[Visitation] is about 50% down on what we’d be expecting this year," Ms Legnavsky said.

Cardrona hoped to break even at the close of season, she said.

"It’s kind of viable very short term, but what it does do is it puts us back quite a lot in terms of development and improvements of what we need to do going forward," she said.

Both operators said they were grateful to receive the wage subsidy and expected snow conditions to remain good until late October.