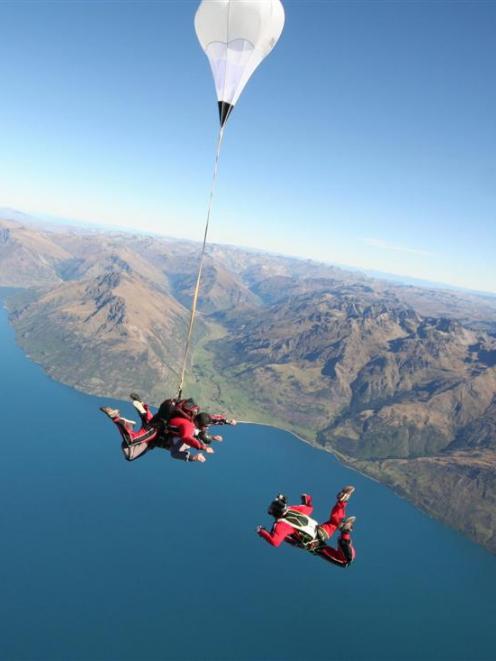 An image which could debunk claims of UFO activity over Queenstown. The globalparanormal.com account describes a white orb, which could be the drogue pictured at top. Photo supplied.
While on a tour boat cruise earlier this month, a tourist reported photographing two UFOs above Queenstown, but investigations by the Queenstown Times have revealed a possible explanation.

Under news and articles on globalparanormal.com and headlined ''Two UFOs caught above Queenstown, New Zealand'', the witness posted a story detailing the sighting.

''I focused my camera on to the plane, then noticed that it had ejected what appeared to be a shining round object.''

The witness reported being the only one from the tour group of around 25 watching the sky, as the others were focused on the lake tour.

''The objects took their time, initially forming a triangular shape, then occasionally mingling together, but always with the white glowing orb in the top position.''

The witness took photos and the site boasts a slide show of the photos in sequence, with one shot appearing with the caption ''no matter how much I changed the focus, these objects remained `blurry' ... as if of not solid mass''.

Nzone Skydive marketing co-ordinator Ann-Louise Riddell confirmed the plane in the photos looked like one belonging to the company and the deposited objects looked to be a tandem skydiving pair freefalling at over 200kmh with a drogue attached, which is the white mass seen at the top of the photo.

The drogue slows the skydivers down to the camera flyer's speed and controls their freefall.