Frontline tourism staff in Queenstown wore surgical masks as demand for the breathing protection led to a supply shortage across New Zealand.

Pharmacies and suppliers across the country yesterday reported low- to no-stock of the face masks as businesses and individuals rushed to buy them. 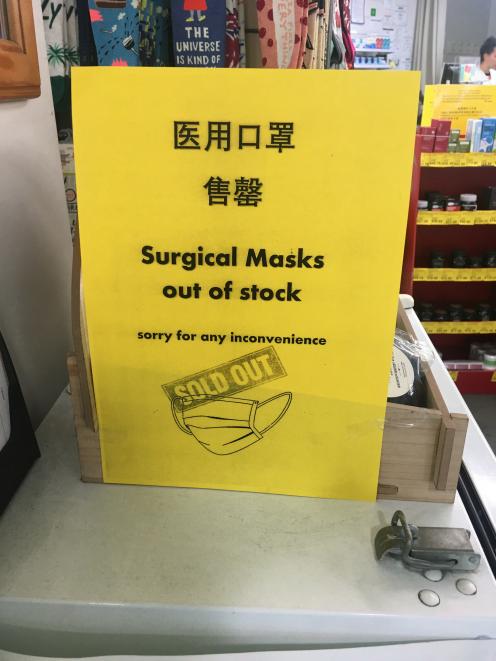 A sign in a Queenstown pharmacy as concern grows over the coronavirus outbreak. Photo: Louise Scott
Sales were fuelled by growing concern the coronavirus that first emerged in China and spread to multiple countries will emerge in New Zealand.

The new virus was yesterday classified as a notifiable disease, meaning the authorities must be told of any possible cases and allowing patients to be ordered into isolation.

As of yesterday, more than 4100 cases of the illness were confirmed across the globe. Almost all were in China and, of them, most were in Wuhan.

All of the 106 deaths attributed to the new coronavirus were in China.

No cases have been found in New Zealand, although health officials concede it is likely the disease will eventually arrive here.

For a few hours yesterday there were fears a case might have been uncovered in Queenstown after rumours spread of a person suspected of having coronavirus being confined to a hotel.

The Southern District Health Board put paid to the claim, and chief medical officer Nigel Millar said the organisation was not actively investigating any suspected coronavirus cases.

Southern businesses are bracing for what is expected to be a significant decline in tourist numbers.

It is anticipated several parties of Chinese tourists will call off their trips, and businesses have been advised to process any cancellations with understanding.

About 400,000 Chinese visited last year, but with that country having suspended its tourism bureau, those numbers are expected to drop sharply.

The South is in the throes of catering to many thousands of Chinese tourists as part of the Chinese New Year holiday.

Pharmacist Glenn Mitchell, who owns two pharmacies in the resort, had run out of the masks but said more were due to arrive from suppliers late this week.

‘‘It is mainly Chinese wanting to buy them. Every third question in store is about them,’’ he said.

‘‘But also tourist operators who are getting them for their frontline staff, worried locals who are concerned.

‘‘We are having a lot of inquiries and have ordered more.’’

Ngai Tahu Tourism group had implemented a number of measures as a result of the disease. Spokeswoman Katarina Johnson said this included the distribution of face masks last week.

Wayfare chief executive Richard Lauder, whose company is parent to Real Journeys, confirmed some of its staff had chosen to wear the masks while at work.

‘‘If our staff wish to wear them, then we are more than happy to provide them.’’

New Zealand Director-general of Health Ashley Bloomfield said there was limited evidence about the effectiveness of the masks, but he did not want to discourage people from wearing them.

‘‘I think people should wear masks if they feel that that is protecting them,’’ he said.

University of Auckland pathology associate professor Simon Swift said cheap store-bought face masks were unlikely to provide much protection, because they did not provide a seal around the face and were often reused.

‘‘I’m sure they provide more protection than breathing in the air, but it would a naive assumption to think: ‘It’s all right, I’ve got my $5 face mask, I’m protected’,’’ he said.

Prof Swift said the virus could still get on other places on people’s skin and when removing the mask, people would touch the outside, where the virus could potentially be sitting.

‘‘I personally haven’t rushed out to buy one,’’ he said.

Health Minister David Clark said despite having no cases of coronavirus, New Zealand remained vigilant, and the National Health Co-ordination centre had been activated to co-ordinate the Government’s response to the disease.