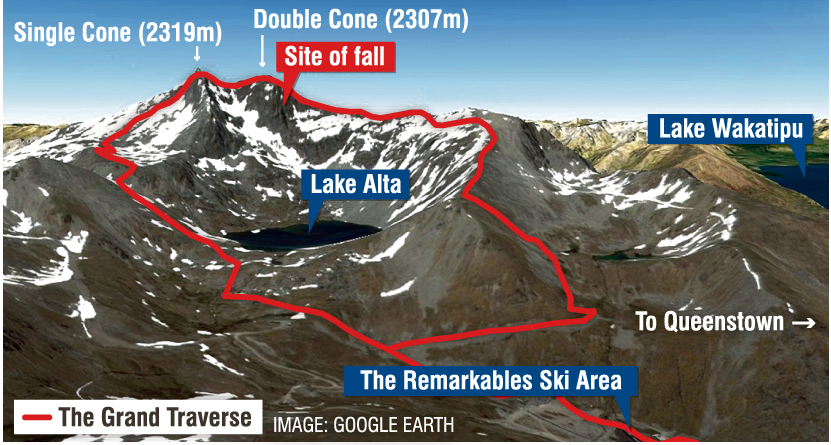 The body of the second climber who died after a fall during a tramp on the Remarkables yesterday has been recovered this morning.

Two men died yesterday after falling during a guided tramp on the Remarkables mountain range in Queenstown.

Yesterday Sergeant Steve Watt, of Queenstown, said one man's body had been recovered and police were working to recover the second and notify next of kin.

Police said last night the search for the second body had been called off.

Police said the recovery team, made up of staff from Police and Alpine Cliff Rescue, headed out at again 6am this morning and located the second climber shortly after 8am. 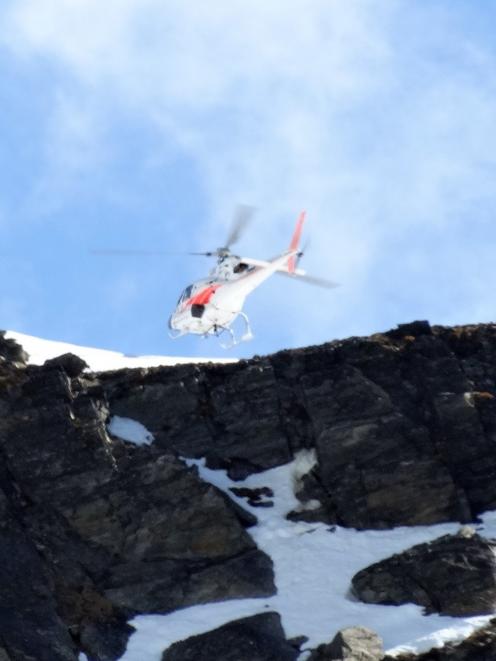 A helicopter flies over the site where two men died on the Remarkables yesterday. Photo: Guy Williams
The pair had been roped together while on an Aspiring Guides trip of the Grand Traverse when they fell about 11.45am, he said.

''Inquiries are continuing ... to piece together what's occurred.''

In a statement, police said the pair ''fell from the side of a cliff face''.

Aspiring Guides general manager Jess Marriot confirmed there had been a ''serious incident'' involving ''one of our parties'' yesterday.

''It's currently being dealt with by the police and I'm unable to provide any further information,'' she said.

''We are currently doing everything we can to support the police with their investigations.''

Mr Prudden said he was guiding clients at Lake Alta, just below the traverse, when the incident happened.

He helped with the rescue, providing information to the rescue team in Queenstown.

The traverse was a grade three alpine route, which required a good level of climbing ability.

A lot of people crossed the traverse in summer and ''a lot of poor management goes on on that ridge''.

The Alpine Rescue Team had rescued six people there about five weeks ago when they got stuck in unstable snow conditions.

''In this case, it was a professional guide who was managing the situation, and I think there was something very untoward that happened.

Mr Prudden said there was still snow in the area, although the site of the incident was 60% to 70% exposed rock.

Aspiring Guides was founded in 1990 and bought about six months ago by Vickie Moses and Lukas Kirchner.

The company's website describes the Grand Traverse as ''one of the best alpine outings in New Zealand''.

It says the route required ''scrambling'' along an exposed rocky ridge up and over the twin summits of Single Cone and Double Cone and was suitable for ''anyone with some hiking experience and a good head for heights''.

The website recommends, for that particular climb, the ability to complete a 500m-1000m ascent and descent, and six to eight hours' physical activity in a day, carrying packs weighing less than 10kg.

A Queenstown-based Otago Regional Rescue Helicopter with a search and rescue crew on board was asked to respond soon after the call for help arrived.

Helicopters Otago chief pilot Graeme Gale said the machine was on the scene within minutes.

WorkSafe said in a statement yesterday it was making initial inquiries into the incident.