Unsightly Lake Hayes is a 'work in progress' 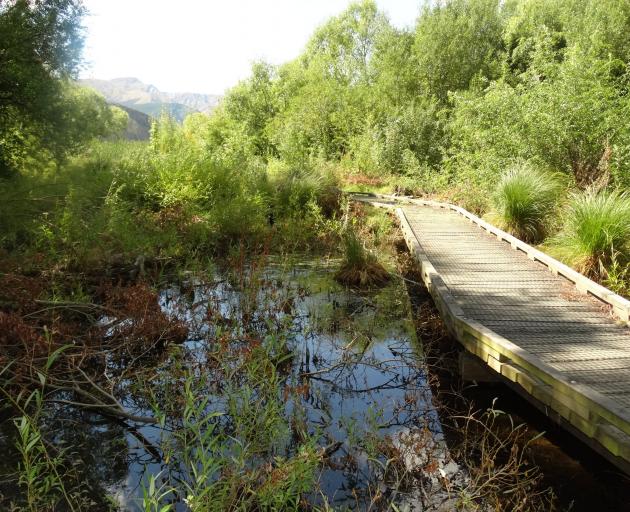 Queenstown Lakes mayor and lakeside resident Jim Boult says it is a work in progress, while the Friends of Lake Hayes want the problems afflicting the wetland dealt with more quickly.

Auckland resident and public relations firm boss John Boyd contacted the Otago Daily Times to say he was dismayed by the state of the walkway through the wetland.

Mr Boyd said he could not believe one of the most-photographed lakes in the country had been allowed to get into that state.

''Hopefully, something can be done to return it to the beautiful walk it once was.''

Friends of Lake Hayes secretary Richard Bowman said part of the problem was a decades-old culvert under State Highway 6, through which the lake's only outlet stream flowed.

It had been ''underdesigned'' with only a single 90cm diameter pipe, which meant the lake was unable to release water quickly enough.

''So when you get prolonged wet spells and snow melt, it's like having a plug hole that's not big enough in your sink or bath - it just takes a long time to come out.''

An unusually wet spring raised the lake to the point where it flooded a 600m length of the walkway for weeks, forcing track users to either turn around or wade through ankle-deep water.

Mr Bowman said the Otago Regional Council was looking at ways to improve the stream's flow on either side of the culvert, but the best solution was for the NZ Transport Agency to replace it.

The adjoining landowners had agreements with the Department of Conservation to clear the willows and replant the area with native species, but the work was ''not an instant fix'' and would need ongoing attention and money, he said.

The Friends had been discussing the issues with the ORC, Doc and the Queenstown Lakes District Council for years.

''We would like to see things moving much more rapidly, particularly with the lake level issue.''

Mr Boult, whose lakeside home of 37 years is near the walkway, said it was ''near and dear'' to him, and he had personally paid for about half the track's cost.

His council had no role in dealing with the issues because the land in question was controlled by Doc, the ORC was responsible for the lake and outlet stream, and the culvert belonged to NZTA.

''Our part in this is only to encourage others to get the work done.''

The NZTA was well aware of the culvert issue, as he had been raising it with the agency for a more than a decade.

Although he was frustrated at the lack of progress, everyone was aware of the issues and the wetland remained a ''work in progress''.

He understood the two landowners who had cleared willows intended to replant those areas with native species soon.