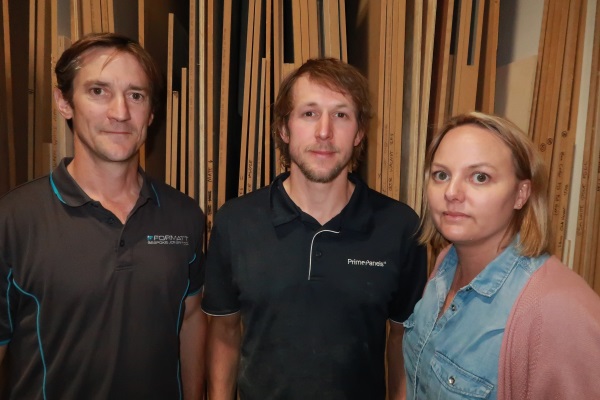 In that time he’s had two brain surgeries for cancerous tumours.

However, he’s not only fully recovered from the last one, he’s successfully competing at a high level in long-distance runs and triathlons, and is training for the full Taupo Ironman in March.

INZ last month declined the 34-year-old’s application for an essential skills visa, for another three years, alleging his health is not of an acceptable standard and it’s highly probable he’ll be a further drain on the public health system in this period.

That decision is currently under appeal.

"Clint’s got a condition, but we also know he manages it very well, and I think he’s got a lot more to give."

He says "there’s very, very few around with the level of experience and technical skills to do the job, so from a professional point of view he sets the standard — he certainly sets the standard across our floor".

Co-owner Angela Spackman says, as required by INZ, they advertised his job to NZers, but nobody suitable came forward.

In a letter to INZ, she and Bogue state: "Shortages in the construction industry, coupled with the approaching ‘shovel-ready’ infrastructure projects, mean that Immigration NZ should not be sending proven workers with essential skills offshore.

"It would be economic mismanagement … to send skilled labour overseas."

Spackman says Williams also trains their apprentices the government’s keen on putting through the system.

"I just think it’s out of balance for what he’s contributing [versus] the costs he may incur.

She says "on a day-to-day basis Clint is an extremely healthy man".

The pair, Spackman and Bogue have told Immigration, are active members of the community and have fundraised for the Cancer Society.

Rather than being a burden on the health system, they’d made "a direct, meaningful and positive contribution to it".

Spackman: "As a business, it’s incredibly frustrating that we have a great staff member who is doing really good work for us, and we feel like the rug’s being pulled from under us.

"It just doesn’t seem fair that somebody who is fit and healthy, and as capable as Clint, shouldn’t be able to be part of NZ’s fabric."

Williams, a joiner for 15 years, says the situation’s stressful "because you can’t plan anything, and there’s always that fear of, if it gets declined, how long have I got before I have to leave?"

"I’ve got eight years of my life here, so that’s everything — I have nothing left in England."

He adds he and Barber have also both lodged residency applications.

However, he’d needed "significant neurosurgical intervention from the public health system for a brain tumour, including surgery, chemotherapy and radiotherapy, in 2018".

"The medical assessment of his application found that there is an ongoing need to monitor the remaining brain tumours, and there is a high probability of him requiring further medical intervention from the public health system which is already under pressure and expensive to provide.

"Therefore, he was confirmed to not have an acceptable standard of health to be granted a temporary work visa."