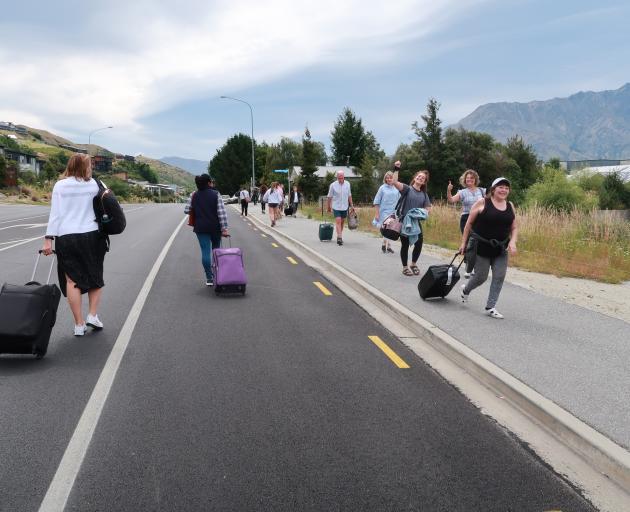 Travellers head towards and away from Queenstown Airport on Saturday morning on foot after a serious crash shut Frankton Rd — the main route from Queenstown to the airport — for several hours.PHOTO: PHILIP CHANDLER
People ditched their cars on the side of Frankton Rd on Saturday morning, opting instead to walk to Queenstown Airport after a serious crash forced police to close the road for more than four hours.

The crash, involving three vehicles, happened about 7.25am at the intersection of Middleton Rd and State Highway 6A.

One male, trapped in his vehicle, was later taken by helicopter to Dunedin Hospital in critical condition while another person sustained minor injuries and was treated at Lakes District Hospital.

However, the incident caused massive delays for anyone trying to get from the Queenstown side of the crash to Arrowtown, Queenstown Airport, or beyond.

A stop/go was in place on the single-lane Edith Cavell Bridge to assist with traffic flow, but getting to the bridge took about an hour from Queenstown, and traffic was also backed up along Frankton Rd to the crash site.

Buses were planning to go along Frankton Rd to the crash site, ask passengers to walk past the scene and then get on to another bus to transfer them.

One passenger, however, said the bus was not moving either, so he opted to walk to the other side where a friend picked him up.

He saw at least 12 people walking towards Queenstown Airport with suitcases.

The international airport had earlier warned of delays for travellers via its social media channels.

A police media spokeswoman said yesterday a serious crash investigation was continuing and was expected to take "some time".

Highway closed for four hours. Police should be able to get there, photograph the scene, take measurements and get the vehicles towed away in a quarter of that time, and if they can't, then they should practice until they can--if Americans can do it on their busiest highways, why can't NZers and Canadians? (here)