The plane makes its way under the water arch on arrival to Queenstown Airport. Photo: RNZ
After more than a year, the first trans-Tasman bubble flight into Queenstown has arrived.

Qantas flight QF121, from Sydney, arrived at Queenstown Airport about 2.30pm under a triumphant water arch spouted by a pair of fire trucks.

Just over 30 minutes later the terminal erupted the claps and cheers as the first international tourists the resort has seen since, effectively, last March walked into the arrivals hall.

About 100 people were on the flight.

AJ Hackett is onsite and will be offering a free bungy jump to the passengers as they disembark, but there's a catch - they'll have to do the jump immediately after arriving.

On the welcome front - songs heard playing to greet arrivals have included Dave Dobbyn's Welcome Home in Auckland, Dragon's April Sun in Cuba in Queenstown and Never Tear us Apart in Wellington.

Queenstown Lakes District mayor Jim Boult, who was at the airport, said it’s been a long 387 days since the last international flight into Queenstown.

He said what has happened has been a huge wake up call for the district.

And he said the town owes a big thank you to all those domestic tourists who came to town and supported businesses here.

Queenstown Airport Board chairwoman Adrienne Young-Cooper said it was fantastic to have the town open to flights from Australia.

She said she was glad it was happening now when it could have been much later.

"It's incredible. . . and really important for the Southern Lakes community," she said.

"Although it's been wonderful having so many Kiwis come and visit this part of New Zealand, really at the end of the day we need more.

"It's been tough for a lot of local businesses, this is not going to be back to where things were in 2019, but it is actually the start of a really important recovery". 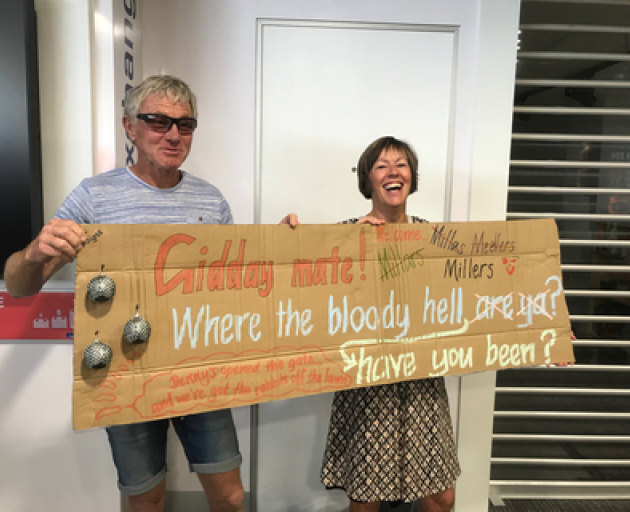 Friends and family of those on the flight into Queenstown are waiting with signs in the arrivals lounge. Photo: RNZ