By Philip Chandler
0 Comments
It has been 40 years since the first grapes were planted in the Gibbston valley. Phillip Chandler spoke to the man who started it all, Alan Brady, about the early days and Cass Marrett spoke to winemaker Jen Parr of Valli wines to find out what the next 40 years might bring.

The odds were stacked against journalist-turned-winemaker Alan Brady when he planted the first grapes in the Gibbston valley 40 years ago.

Dunedin-based and wanting a slice of Otago back in the late 1970s, Mr Brady explored farming deer and angora goats but eventually settled on grapes. 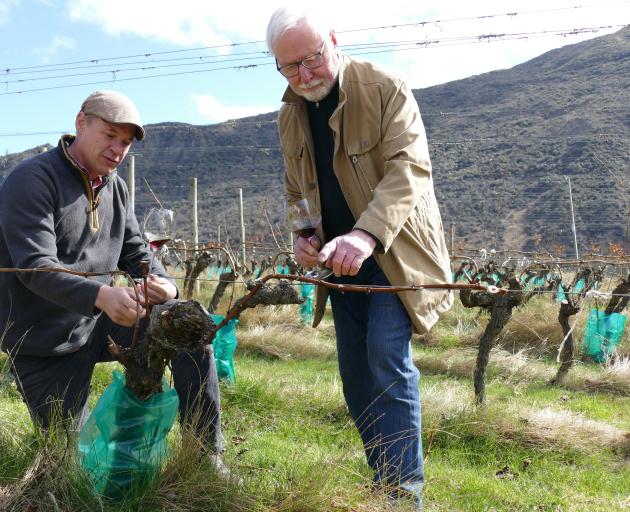 Gibbston Valley Winery chief winemaker Christopher Keys (left) and Gibbston wine pioneer Alan Brady inspect some of Mr Brady’s first vines, planted 40 years ago. PHOTO: TRACEY ROXBURGH
‘‘I thought the climate and the atmosphere and the landscape is similar to what I’ve seen in grape-growing parts of Europe and realised we were at latitude 45, which runs through the South of France, Bordeaux and north of Italy — serious wine-growing territory.’’

At the time, North Island experts and a University of Otago study advised against growing grapes in Central Otago because it was too far south and too cold.

‘‘Being stubborn and Irish, I decided to plant some grapes anyway,’’ Mr Brady said.

Reflecting on the first grapes’ 40th anniversary, he said he did not know what he had started at the time. 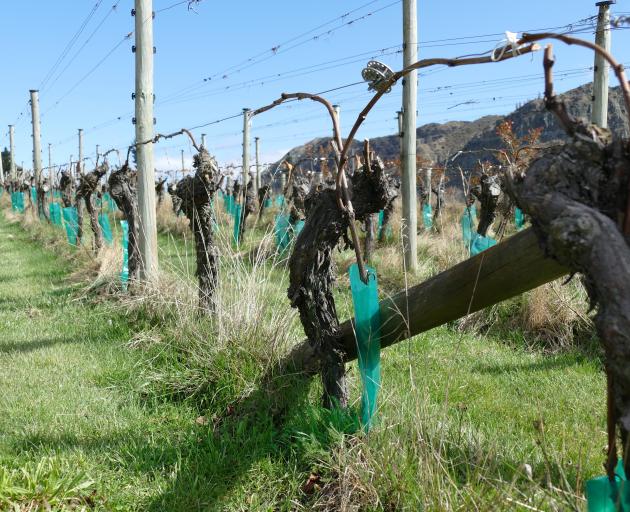 Some of Gibbston’s first vines, now almost 40 years old, at Gibbston Valley Winery, from which its acclaimed ‘‘Le Maitre’’ wine is made.PHOTO: TRACEY ROXBURGH
After planting several varieties in 1981 that did not take, he planted some more, including some pinot noir, the following year.

‘‘Pinot put its hand up. It wasn’t anything to do with my wisdom or judgement or vision, it was pure luck.

‘‘We were lucky we stumbled across it early, because New Zealand was only waking up to pinot noir,’’ Mr Brady said.

‘‘It only goes well in very few parts of the world — Central Otago is now regarded as one of ‘the’ places to grow pinot noir in the world.’’

‘‘We were, together, peasants scratching in the dirt of Central Otago — then we all got together and formed the Central Otago Grape Growers’ Association.’’

Mr Brady put out the first commercial pinot noir in 1987.

Those same vines still exist and produce wine today — even though he has nothing to do with them now.

But the 85-year-old is still making wine under the Wild Irishman label, a play on his heritage and also the name of a prickly plant that grows on Otago’s hills.

When he first started out he was playing it by ear.

‘‘I planted some grapes not really knowing how grapes grew, really ... You learn by watching and listening to nature — every season we learnt something and ... I’m still learning.

‘‘The remarkable thing about Central Otago is that in 40 years we’ve achieved an amazing reputation internationally. 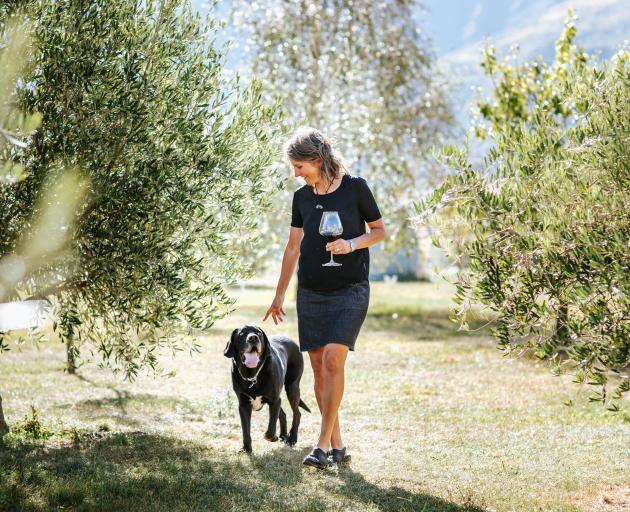 ‘‘Other famous wine regions in Europe have taken hundreds of years to attain the same level of recognition.’’

That reputation found its way to a small bottle store in Notting Hill, London, where winemaker-to-be Jen Parr made a specific pilgrimage for bottles of wine from Rippon Vineyard in Wanaka.

The wine Ms Parr was sampling would eventually bring her to New Zealand to live and work — at present as an award-winning winemaker at Valli, under Mr Taylor, which has vineyards in Gibbston and Waitaki.

Originally from Oregon in the United States, Ms Parr was selling financial software in London and abroad, when wine became her ‘‘hobby’’.

‘‘It started to become an obsession to the point that I thought, ‘well, why am I working in an industry that doesn’t excite me in the same way?’.

‘‘I thought it was time to explore doing something that I might actually really love,’’ Ms Parr said.

Her love of winemaking has earned her five trophies for pinot noir and pinot rose and last year the Winemaker of the Year award. 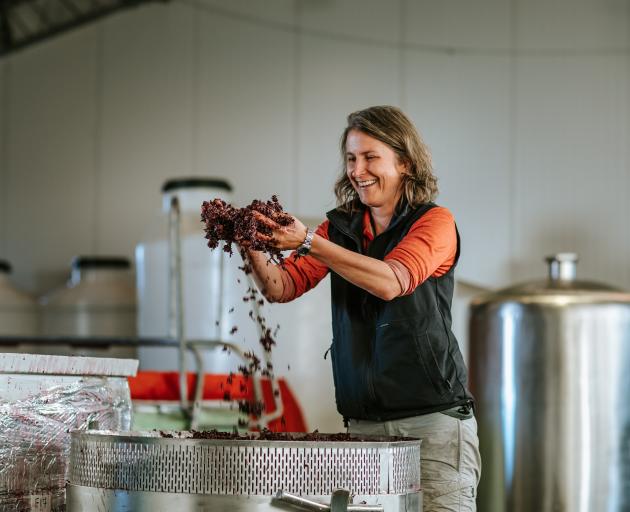 The key to good winemaking is letting the grapes tell their own story, winemaker Jen Parr says. PHOTO: SUPPLIED

Her experience encompasses working at several vineyards in New Zealand and internationally, including in the United States, France, South Africa and Australia.

It was the story-telling aspect of winemaking that originally attracted her to the craft, she said.

‘‘Wine can transport you to a place ... You could be trying a wine from Greece sitting in London, and you can almost taste the salty sea air.

‘‘Wine basically is a story-teller for a place and a time and people that interact with that place in that time.’’

The story of a Gibbston wine was rooted in history, the land’s glacial movements and fertile soil.

‘‘If you walk up Mt Rosa and the hillsides or down near the bike track that goes by Peregrine [winery] you’ll smell an abundance of wild shrubs and herbs.

‘‘It’s not just the classic wild thyme that you find pretty much everywhere in Central Otago where grapes grow.

‘‘You see sage, you see rosemary, you see rosehip and those smells and that expression of the fertility of the soil is certainly something that is captured in the bottle.’’

Being home to the first commercial pinot noir in 1987, Gibbston’s story was also largely written by the type of person it attracted.

‘‘You have people like Alan Brady, who took a chance being a journalist, who came and planted some grapes and planted all kinds of things, because at the time, nobody really knew what would work.’’

Looking forward to the next 40 years of winemaking, Ms Parr said the valley had already been dealing with the impacts of a changing climate.

‘‘To express this beautiful place, Gibbston, in a season, which is very erratic: if you’ve lived here a while, we’ve been having the warmest winter on record. Then we might have a really wet season; [20]’18 was really warm.

‘‘There is no normal in terms of how nature is going to shape that expression of the place.’’

The consistency of Valli’s winemaking came from working with the same sites and asking the same questions, such as what part of the vineyard should be picked first, and whether some of the stalks or skin should be included, Ms Parr said.

The answers to those questions depended on the year.

‘‘That’s the beauty of why each year, when you taste the Valli Gibbston pinot noir, you taste the perfume, you smell the perfume, you feel the silky fine texture, you admire the spice, but each year, it’s slightly different from the previous ... You recognise it as Valli Gibbston, but you get the thrill of, ‘wow, what is this season going to bring?’.’’

She expected climate change would continue to have an impact on ‘‘everything’’ and the key to great winemaking was being ‘‘responsive, not reactive’’.

‘‘In responsive winemaking you wait, you see something that’s a little bit different than what you expected and you pause and see what it actually is going to bring.

‘‘Once you’ve slept on it, or you’ve left it or you’ve thought about it with your team for a few minutes, sometimes you realise that’s actually destiny.

‘‘What I find with the younger generation is they have a real respect and appreciation for wines that do tell a story, wines that are transparent ones that aren’t pushed, you know, wines that are born of narration, rather than trying to write a story.’’

Mr Brady’s legacy would remain in in good hands, she said.

‘‘Those lucky young winemakers who get to have a crack at making Gibbston wine are going to do it a service and help preserve that character of Gibbston, and help ensure that we’re still making these world-class wines in decades to come.’’