Actor dreamed a dream to play key role in musical 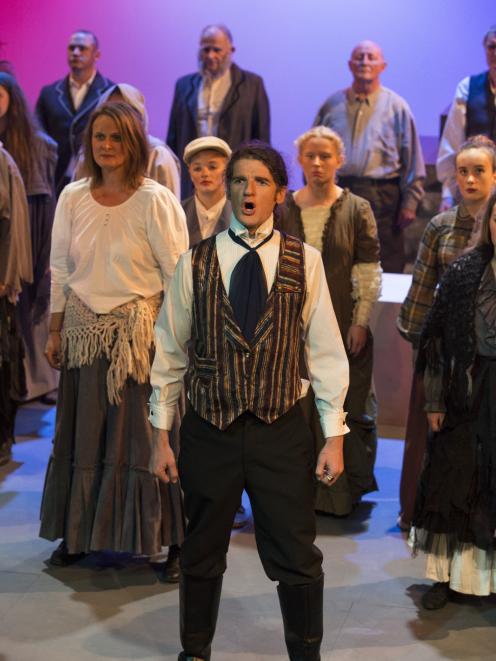 Malcolm Gordon is commuting from Dunedin for rehearsals to play Marius in West Otago Theatrical Society’s winter production of Les Miserables in Tapanui later this month. Photo: Kirsten McIntyre
A "bucket list" opportunity has motivated a Dunedin amateur performer to commute for four frosty hours to rehearsals this winter.

Knox Centre worship enabler and veteran of Otago musical theatre Malcolm Gordon said when he heard West Otago Theatrical Society was staging Les Miserables in Tapanui later this month, it was too good an opportunity to miss.

However, having just become a father for the third time, domestic diplomacy dictated a minor role at most, with minimal time commitment — or so he hoped.

Originally auditioning for the "small, but rewarding" role of Bishop of Digne, Mr Gordon said he was persuaded by director Margie Rea to take on the more significant role of student agitator Marius, love interest to central character Cosette.

That had led to a "fair bit" of driving since February, and some creative thinking around rehearsals.

"Margie cornered me to play the role of Marius, for which, really, I’m hugely grateful as Les Miserables has been on my bucket list forever; but it has required a few compromises, not least from my very understanding wife, Vanessa.

"We’ve managed to restrict on-set rehearsals to Sundays, and car-pooling with fellow travelling performers via Lawrence has helped."

Milton-born Mr Gordon said intensive one-on-one rehearsals in Dunedin with Cosette actress Ashlea Moss, of Canada, and other "remote work", allied with babysitting support from South Otago family, had made the improbable possible.

"It was just such an opportunity that it was always going to be worth the effort."

Mrs Rea said Mr Gordon’s dedication was typical of the attitude of a combined cast and crew of more than 100, a figure which would make Les Miserables West Otago’s largest and most ambitious production ever.

"Because people love the show, with its stirring story, brilliant songs and colourful characters, it’s attracted a very talented cast from right across Otago and Southland. I’m thrilled to see the heart everybody’s thrown into their performances."

"On the face of it you might think, ‘Yeah-nah’, but this is really just a great meeting point for a region-wide production of a timeless classic. It’s going to be spectacular."