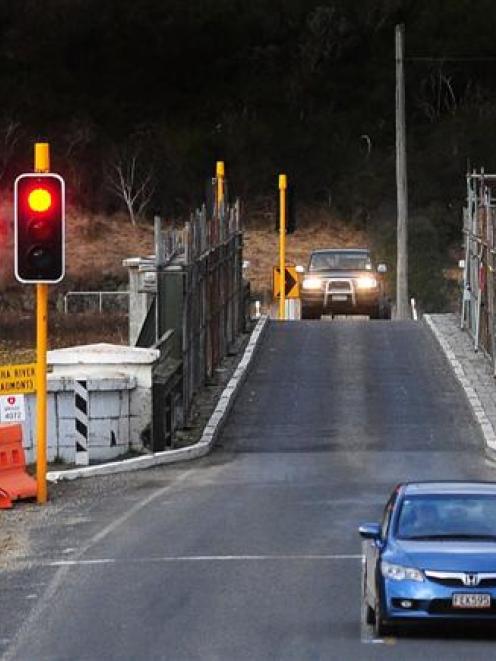 Beaumont bridge is the costliest in the region to maintain. Photo by Craig Baxter.
The New Zealand Transport Agency is spending more than $800 a day in maintenance costs on Beaumont bridge, on State Highway 8.

NZTA's operations manager for Otago-Southland, Murray Clarke, has confirmed more than $1.5 million has been spent on the 123-year-old bridge in the past five years, making it the most expensive bridge in the region to maintain.

The NZTA has spent an average of $100,000 annually for the past five years on the single-lane Kawarau Falls bridge on State Highway 6 between Frankton and Kelvin Heights.

The latest Beaumont bridge expense was $180,000 to install traffic lights last month to make driving on to the bridge safer and to reduce speeds, thereby reducing damage and maintenance, he said.

After spending $400,000 on maintenance last year, the NZTA began investigating the possibility of replacing the bridge with a modern two-lane structure.

"The maintenance costs are significant ... and have continued to increase over the last five years," Mr Clarke said.

"It's got to the stage we have to be concerned about it because the costs have got that high."

The NZTA's Otago-Southland regional director, Bruce Richards, told the Otago Daily Times late last year the bridge could be replaced in the next 10 years, but decisions about a proposed hydro-electric dam would affect planning.

If the dam was built downstream at Tuapeka Mouth, the Beaumont bridge would end up under water.

Building upstream could provide an alternative crossing and render the bridge redundant.

Contact Energy's hydro project manager, Neil Gillespie, said a decision on the preferred option for the hydro-electric development would not be made until next year.

After a preferred option was selected, formal consultation would take place in 2011 and 2012, followed by an application for resource consent.

Mr Clarke was not concerned about spending money on the bridge despite Contact possibly flooding the valley.

"We have to maintain the bridge to a safe standard - it has nothing to do with what Contact is doing."

"We are interested in the Beaumont bridge because when they close it down, traffic gets diverted across the Clydevale bridge."